It has to be a stretch of the imagination to compare the Tour de France with a bike ride in Laos but let’s give it a go.
Among touring cyclists in South East Asia, the ride between the Laos capital, Vientiane, and the UNESCO world heritage town of Luang Prabang is about as good as it gets. There are strange limestone karsts and mountain vistas on which to feast the eyes and stiff climbs and frightening descents to provide a physical challenge. There are colourful villages - not the quaint, perfectly manicured ones of France but simple homes inhabited by hill tribes who cling to a way of life that hasn’t changed much over the past four decades. Sure they may have electricity and fresh water (the latter thanks to World Vision Australia), but the thatched roofs of many homes have not all been replaced with corrugated iron.
The ride is much shorter than the real Tour - just over 400 km, but for us in our 60s on a tandem it provided enough of a challenge to remind us of the pleasures and pain that come from real cycling - not the lowland, flat stuff we have experienced through much of the rest of SE Asia so far.
And unlike the real Tour, there are no rules - just a few suggestions.
Le Tour de Laos can be ridden either way - north or south, but it’s easiest cycling from Vientiane northwards so that two big climbs are avoided on the same day. Competitors are free to start whenever they like but may care to avoid the rainy season. We cycled at the end of March and while it was hot, the biggest disappointment was the constant haze from slash-and-burn agriculture.
To help get in the spirit of the real Tour, competitors heading out of Vientiane are urged to begin by riding along Th Lane Xang, a wide boulevard sometimes referred to as the Champs Elysees. Go past Patuxai, the concrete monstrosity with a vague resemblance to the Arc de Triomphe, and riders should be mentally adjusted to the Laos version of the French ride.
If beginning in Luang Prabang, at least have a baguette and a cup of rich, strong Laos coffee before setting out.
Unlike the real Tour, no-one cares about performance enhancing drugs or alcohol, so plan your Laos ride safe in the knowledge that at the end of each day you will be able to rehydrate with lashings of Beerlao.
So, to the ride itself - March 2013
Stage 1: Vientiane to Hinheup on Highway 13 (92 km)
It took us more than an hour and 20 km to clear the northern outskirts of Vientiane, but suddenly we were in rolling countryside with only road works to contend with and one longish climb towards the end of the day. Hinheup lies on the Nam Lik River and in the dry season it’s worth riding down to the bridge to watch the locals floating downstream on inflated car tubes, some of them holding umbrellas to shade themselves from the sun. There are two guesthouses here although there wasn’t much sign of life at one of them.
Stage 2: Hinheup to Vang Vieng (65 Km)
Back on Highway 13, the day begins with rolling countryside until the northern end of the Nam Ngum Reservoir, a good place for a break and something to eat. An easy 20 km ride through more limestone karsts brings you into Vang Vieng.
Stage 3: Vang Vieng, rest day/s
We took the opportunity to relax in this town which until recently was a magnet for young backpackers who spent their time drunk, drugged and drowning themselves tubing in the Nam Song River. In the last year, the Government has stepped in, ripping out the floating bars and ordering an end to the most dangerous behaviour. Now Vang Vieng is much more subdued, and its visitors are taking part in safer pursuits such as kayaking, rock climbing and tubing without ‘substances’ (well, maybe just a can of Beerlao).
Stage 4: Vang Vieng to Kasi (66 km)
The first real test came today, but before we got to it a squeaking noise from our tandem grew steadily worse. We tried tightening the couplings that enable the frame to be taken apart, but it made no difference.
In true Le Tour style, the spectators became a problem. As well as the usual cries of “sabaidee”, scores of young schoolboys wanted to “high five” Judy as we passed by. Some of them struck her hand so forcibly her arm became sore and we started to avoid these young fans. Other children ran alongside as we slowly climbed and some of them pushed from behind - trying to help but giving us the wobbles.
About half way through the day’s ride we struck a stiff climb which went on for several kilometres. We stopped to drink from our water bottles a couple of times, but managed to cycle all the way up.
Our guesthouse at Kasi that evening sported a concrete table with an inset draughts table and draughtsmen made of bottle tops for one player and pebbles for the other. We sat in the dusk and had a game as we drank our Beerlao.

45 km may not be far, but there was lots of climbing and we were happy to take our time and enjoy the scenery. The highest point was at 1,388 m. Early on we traced the tandem’s squeak to two bolts used to adjust the tension of the front chain. By easing each bolt a quarter of a turn, the sound disappeared.
We passed through more Hmong villages and were overtaken by Michael, a young Swiss rider who chatted with us until we could no longer keep up. Later we stopped at a  roadside restaurant that would have had spectacular views if it wasn’t for the haze. We were joined by another cyclist whom we dubbed “The Monkey Man” and sported tight lycra bib overalls. Within a few minutes he had given us his life story – ex military policeman, martial arts expert, lived in Thailand 10 years, enjoyed the company of the hill country people (the women, he says, dance all night while the men sleep). He is like an Energizer battery and we are exhausted just listening to him. Fortunately, the climbing for the day is over and we have a gentle cruise over the last few kilometres into Phou Khoun. Stage 5, Phou Khoun to Kiukacham (50 km)
Within a couple of kilometres of setting out, the winding road plunges downhill and we know we are going much too fast for safety. One of the disadvantages of tandems is that the extra weight of two people plus their luggage can cause the wheel rims to overheat from the friction caused by the brakes. The worst case scenario is a burst inner tube while travelling at speed.
We checked the brakes and sure enough, the rims were too hot to touch for more than a split second. We walked the bike downhill until we were satisfied things had cooled down enough for safety, then climbed back on – repeating the process till we reached the bottom. Despite our efforts, the front tyre goes and we examine the tube - there is a tiny hole but no sign of a sharp object that could have punctured it. We make a roadside repair and carry on.
The uppsy downsy riding continues as we climb back up to 1,400m and find a guesthouse with a surprisingly good restaurant at Kiukacham.

Stage 6 Kiukacham to Xiang Ngeun, (55 Km)
We have hardly set off the next morning before we are losing height again - more than 1,000 m in 20 km - and resume worrying about the brakes.
We make it safely to the bottom and stop at a bridge over the Nam Ming River to take photos before embarking on a 15 km climb up to more than 1,000 m altitude. On the way, we pass three women dangling what look like live rats by their tails. They are trying to sell them to passing motorists. Straddling the bike, it’s hard to get close enough to see if they’re rats or some other kind of rodent, and the language barrier makes it too difficult to ask.
At the top of the climb we stop in a small village for cold drinks at the only stall. It’s tiny and inside the owner is sitting on the floor playing with his baby son. He passes us two bright yellow Beerlao crates and insists we sit on them in the shade of his stall. The seats are just a small thing, but the hospitality doesn’t go unnoticed by us. 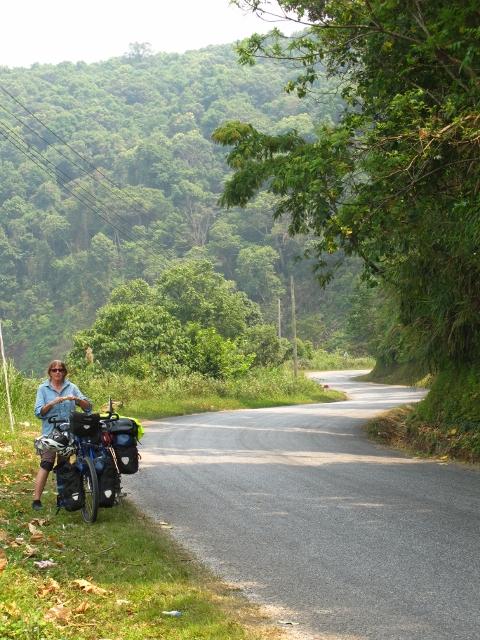 It was time for the second big descent of the day, and we set off cautiously. We alternated the use of the brakes  - first the back one, then rest it and use the front one - in the best tandem riding style.

We were almost at the bottom and could see the road levelling out but our nerve failed us. We decided to pull over to walk the last few metres but as we slowed we could feel that unmistakable wobble that means a flat tyre.
We limped into the town of Xiang Ngeun and under the shade of a tree replaced the inner tube. Again, there was a tiny hole but no sign of what had caused the puncture.We gathered a small audience, one of whom was fascinated at what came out of a pannier – plastic cups, a jar of creamer, wet weather leggings and finally the tool kit. Judy took command of someone’s outside table so we could work clear of the dust and dirt.
Accommodation that night was definitely not up to the standard riders would expect on Le Tour but we didn’t care - we were in one piece and we knew there were no downhills to worry about the next day.
Stage 7 Xiang Ngeun to Luang Prabang (25 km)
With just a short, easy ride to Luang Prabang we enjoyed the luxury of a sleep-in until our alarm went off at 7 am. A cup of tea, some coconut snacks and we were back on the road. There was just one hill about halfway to Luang Prabang, otherwise it was an easy ride and we are there by mid-morning. We celebrated the end of Le Tour de Laos with egg-filled baguettes and coffee and went off to treat ourselves to a better-than-usual guesthouse.

Posted by Mike Brockie and Judy Yeoman at 00:36