One of the few things we squabble about are directions – whether it's tramping, driving or trying to tell the other where he/she left their glasses. The most recent incident came just yesterday, as we used the mapping system on Judy's cellphone to find the road out of a rural backwater near Rotorua and into town.


After 20 minutes, Judy insisted we were going the wrong way. She was relying on instinct, not the GPS in her hand which showed an arrow taking us away from our destination. But I can hardly blame her. It was the first time she'd used it, and I had given her the vaguest instructions as a I drove. We decided to share the blame.


But it did reinforce a problem we have. Give us a crossroad and we'll go in different directions. So what happens if we were on two bicycles in France, or worse, Laos and came to a crossroad? It would be the last we'd see of each other. We both tend to get a bit stubborn in these situations and neither of us would be giving in.


So the idea of a tandem seems quite smart. I'll steer, Judy can sit behind me with a GPS (we'll have lots of lessons) and jab me in the ribs with a banana – right side for right turn, left side for left.

Here are some other unconfirmed “facts” that indicate a tandem may be a good idea: 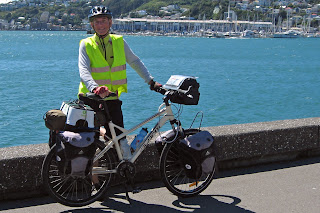 Most cycle tourists load up their bikes with four panniers and a rack at the back, which usually carries a tent. In this picture I also have a plastic seat on the rack to provide a bit of comfort at campsites. There's room for two water bottles on the down tubes and attached to the handlebars is a bag with a map on top. A tandem offers no extra storage - our only option is going to be to load the rack with more than just a tent - probably our sleeping bags and sleeping mats in a drybag.

And here are some reasons why tandems may not be such a good idea:

On balance, we feel we have no option but a tandem. The ability to stick together is really important. We want to be able to share the sights, sounds and smells. And if we do get lost, at least we'll be together.