Sex in the Saddle

I’m having an extra marital affair, although I’m going to be the first to admit that the object of my desire has been slow to respond to my advances. 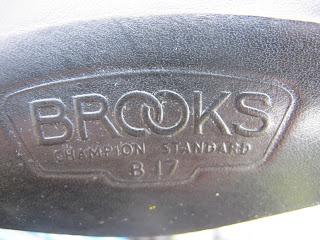 We’ve known each other just a matter of weeks – 34 days and four hours to be exact – and we pretty much ignored each other initially. But with the passing of time, I’ve become much more attached to her. 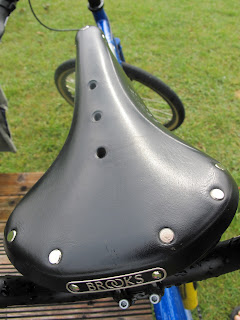 I call her Miss Brooks, first name B 17, and I’d describe her looks as those of a classic beauty. She has a kind of timelessness which comes from being around for a hundred years or so. She has a dark – dare I say it – leathery, tanned complexion and nine shiny highlights on her cheeks.

In her day she was a bit of a player – plenty of others have been before me and I’m learning about her flirtatious ways.
The other day I met an English cycle tourer who showed me Miss Brooks secret Love Bolt or Pleasure Extender. Carefully manipulated with a special sex toy, the Pleasure Extender tightens Miss Brooks’ leathery skin and gives her a firmer touch to my caressing hand.

In case anyone’s wondering, I should perhaps point out here that Judy the Stoker is also having her own affair with a much more dashing and modern looking character called Mr Thorn.

In contrast to Miss Brooks’ tanned complexion, Mr Thorn has a grey pallor and looks ill to me. He doesn’t stand out from the crowd, and I don’t fear the competition. However, Judy points out that they’ve got on well from the start – that he’s been kind up to a point on her bottom and in return demands no attention. The perfect partner for an illicit affair?


Judy and I have talked at length about our extra marital relationships with these two – there are no secrets between us except for one. I caught Judy using the moisturising cream out of her toilet bag to soften Miss Brooks’, and she seemed to take awfully long time to do it. Could it be the start of a ménage a trois, I wondered? But I put that thought aside, along with my feelings of jealousy,  after Judy assured me that she was quite comfortable in the saddle with Mr Thorn.  I suspect their relationship will never reach the dizzying heights – the ecstasy – that I think B 17 (yes, let’s be familiar) will provide over time.  We’ll see.


In the meantime, I’m just going outside to manipulate B 17’s Love Bolt with that special sex toy.  I may be some time.

Posted by Mike Brockie and Judy Yeoman at 06:08