Dear Auntie Agatha,*
Kia Ora from Northern California where for the past week or so we have been among the region’s giant Redwood trees. We know you have always been fascinated by them and how they compare to New Zealand’s Kauri, and as we had promised to write about them – here goes.
The superlatives that have been used by others to describe these trees are well chosen, if often used. There can be no question about their magnificence – not only in their height but also in their delicacy. And there are so many of them – from the Oregon state line to Monterey County. They are overwhelming. 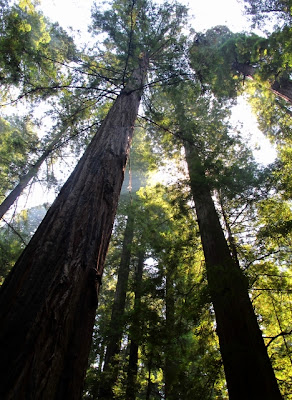 We’ve been able to enjoy them on several quiet walks, especially in the “Avenue of the Giants” where we were joined by our American friends Chuck and Barb for a few days.
The best time to see them is in the late afternoon, when the sun’s rays stretch out and occasionally single trees are highlighted – lit as though by a powerful spotlight in a giant art gallery. The forest silence is overwhelming, and seems to quieten us humans too as we stand in awe. The pools of light sometimes highlight a spray of leaves – narrow and tiny, each leaf only a couple of centimetres long.
And then there are the fallen giants – where the shallow roots have given way to wind or age and the trunks have come crashing down – “widow makers” for any lumberman foolish enough to stand in their path. Even the bases of these fallen trees stretch well above us, and after 40 or 50 paces we have grown tired of trying to walk through the undergrowth to measure how high these trees once stood.

As for comparisons with the Kauri – I’m sorry to have to report that the Redwoods outreach our Kauri by a country mile. Redwoods can grow to 90m (379ft) or more, compared with the Kauri’s 50m (164ft). But the Kauri wins hands down when it comes to girth, more than 16m (52ft) compared to the Redwoods’ 8m (26ft). 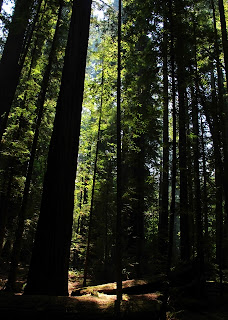 Either way, both Kauri and Redwood are magnificent trees and it’s not surprising they have been plundered over the years – the Kauri for shipbuilding and the Redwoods for railway ties and trestles and now the building industry. Next time you are in Rotorua, it might be worth checking out the height of the naturalized Redwoods at Whakarewarewa – apparently they grow faster there than here because of the more even rainfall distribution during the year.

Barb and Chuck have now headed home to Minnesota and we are heading south again. 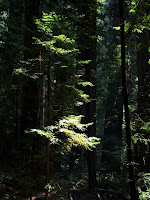 We are back in the hiker/biker sites of the state campgrounds where we stay and surrounded by cyclists of varying ability, determination and intentions. There are the short haulers riding south from places like Seattle in Washington State and Portland in Oregon to San Francisco and the mid rangers like us riding from Vancouver BC to the Mexican border. Occasionally there are the long haulers – who’ve started in Anchorage, Alaska and are riding home to Mexico or have their goal as the bottom of South America.

Today we met two British cyclists making the rare trip north, against the prevailing wind on this coast. They started in Bariloche, Argentina, and after nine months are still going strong and enjoying the easy travel in this part of the U.S. Tonight we are camped next to a solo long hauler who is planning to sell his excellent tent and buy one which will allow him to watch the stars through the roof as he cycles south to the bottom of South America.


Last night we were joined by two short haulers – Carter and Stefan, both American and both in their 20s – who turned up dirty and smelly and entertained us with a lively discussion on the environment. Both are opposed to plans to complete the controversial Keystone XL pipeline which will bring oil from Canada to Texas. But then Carter moved on to tell us  how, when he wasn’t cycling, he jumped freight trains to get around the country. He explained the most difficult part was trying to gauge the right moment to jump off the slowing train, and the most dangerous part was the jump itself.
We asked if many others rode the trains the way he did and he said yes, there were – people forced to take the risk because they didn’t have the money to pay for fares. As he talked, we heard an echo of the past – of dustbowls and the Great Depression and the songs of Pete Seeger and Woody Guthrie. After a few minutes, Carter stood up and reached for the guitar tied to the back of his bike. He broke into a song about the railroad, hitching trains and a young man who ignored the advice of his mother and father. Carter’s voice was strained with emotion, and he fumbled a couple of chords but suddenly we were there – sharing a different era but also one that has clearly not vanished altogether.
So Auntie, that sort of brings us up to date. Hope you are well. Please give Ginger a pat from us and an extra spoonful of Jellymeat. We hope that kink has gone from his tail after Uncle Alf ran over him in the driveway.
Love from


Mike (The Captain) and Judy (The Stoker)
PS: Have added a few other photos. The deer were kind of cute, and maybe Uncle Alf should sell the Nissan and buy a vintage car. 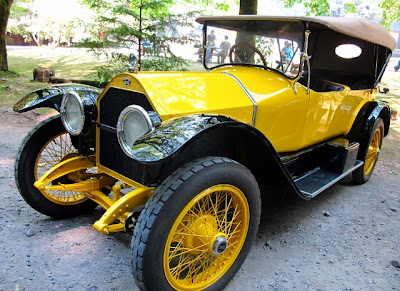 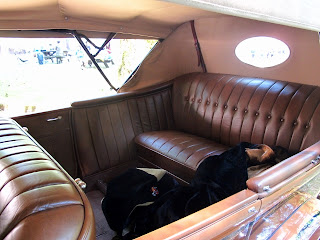 *Auntie Agatha is a fictitious character.
Posted by Mike Brockie and Judy Yeoman at 12:19