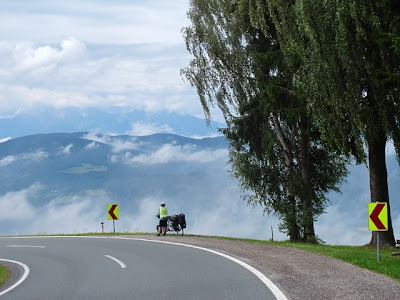 Most cyclists regard Granny Gear as the last spin of the sprockets before defeat – after Granny Gear there’s nothing left but to get off and push the bike up that hill.  The humiliation is enough to keep some cyclists grinding away in other low gears – second or third but never that first cog.


However, over the last couple of days we’ve come to appreciate Granny Gear – the lowest of the 14 gears on our Rohloff-equipped tandem.


We’ve climbed 1,000 metres to 1,359 metres above sea level – not much if you are a Tour de France professional but for us it’s been a challenge. It’s by far the biggest climb we’ve done in the 3,000 plus kilometres we’ve travelled since setting out from Britain, and we knew if we could achieve this climb it would give us a benchmark for the future.


The route was over the Kor Alps in Southern Austria, near the border with Slovenia. No separate cycleway here, instead we shared  the road with Sunday motorcyclists hell bent on shortening their lives.


We clung to second and third gears as the road steepened and faraway mountains came into view. Then as the gradient neared 15% a twist of the wrist dropped the Beast of Bridgwater into Granny Gear. Maybe it’s the experience we’ve gained on the tandem, but instead of wobbling all over the road as our speed dropped to walking pace, about 4 kph, we managed to maintain a reasonably straight line and stay near the verge as those motorcyclists tore by. It was hard work but we were going uphill by bike – no walking required.


We planned to stay part way at a campground shown on our map at  Soboth (1,065 m) but when we arrived there was no sign of it. In one of those “what now” moments we pushed the door open at a hostel and stepped inside. We found a group of children and minders – all members of a Catholic church group from Graz.

We explained our predicament and eventually they agreed we could camp outside and use their showers. We were extremely grateful as the next campsite   was hours away. A sudden thunderstorm swept through the hills and once it was over we lay in our tent listening to the children singing until we fell asleep.


The next morning we left a small donation for the church funds and slipped away early – we still had 300m to climb. Once again, we found a use for Granny Gear but this time the motorcyclists were either back at work on a Monday – or had all killed themselves. 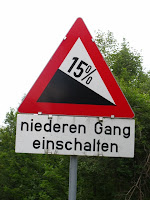 Our descent brought another issue – within a couple of kilometres the brakes were overheating to such an extent that it was impossible to keep our fingers on the wheel rims without getting burnt.  Overheating brakes are a particular issue for tandems – with two up plus luggage they fly down hills as gravity takes over. In a worst case scenario, the heat generated from four tiny little brake pads can cause the air in the tyres’ inner tubes to expand until they burst – with potentially disastrous consequences.


The only option is to rest the brakes by getting off and walking every half kilometre or so. It took us a couple of hours to lose the 1,000m in altitude we’d gained, but at least we were in one piece.
And it was a change from Granny Gear.


Posted by Mike Brockie and Judy Yeoman at 05:35