Vienna must be one of the most bike friendly cities in Europe, but that doesn’t make it easy dashing to the train station on a fully loaded tandem during the morning commuter rush. 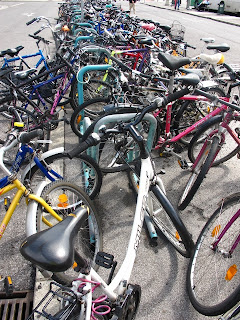 Bicycle lanes suddenly end, or switch from one side of the road to the other, they often have their own traffic lights and sometimes they go the wrong way up one way streets – leaving riders feeling exposed to oncoming traffic.


Add the pressure of getting 15 kilometres across town from our campsite to Vienna Meidling station in time for an 8.02 am departure, and there’s plenty of scope for things to go wrong.


To minimise the difficulties we had a practice run the previous day. In the pouring rain, our GPS led us on a clumsy waltz through the streets of Vienna taking us to two other rail stations before delivering us to the right one. In the process, it led us to an elevator in one station and coaxed us inside – the tandem squeezed diagonally across the lift. We went up one floor to be deposited on a cycle path that saved us no distance at all, but avoided a busy road for perhaps 150 metres. When we finally arrived at Vienna Meidling station it had taken us one hour 50 minutes and we were hot, sweaty and frustrated.


Along the way, we’d been growled at by a waiter for cycling on the footpath amongst his tables (we’d failed to notice the cycle lane on the other side of the road), and by a fellow cyclist alarmed to see us cycling against the traffic flow on a busy road (yes, sometimes you are allowed to do it but other times you are not).


On the way back from our practice run, we devised our own route, making it as direct as possible. It was quicker, but we encountered tramlines which in the wet looked lethal.﻿ 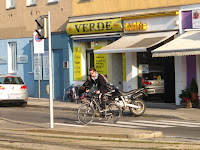 The real test came the next morning. We were up at 4.40 am and had the tent packed and were on our way by 5.30. Dawn was breaking and the first rays of sunshine were lighting up St Stephen’s Cathedral.


All was looking good until we became tangled up in the narrow back streets near the cathedral and began a slow circular dance around the Viennese landmark.  A stranger came to our aid as we waved a map at him, and before long we were underway again – this time defying the rules that said we couldn’t cycle through one of the city’s big pedestrian precincts.


With one final spurt along the footpath for the last half kilometre we were there – in time for our train and feeling relieved that even if we didn’t fully understand Vienna’s cycle rules we had at least survived them.

Posted by Mike Brockie and Judy Yeoman at 05:32