We coasted along the coast on the lookout for a patch of free shade – valuable real estate on a day when once again the temperature was hovering on the wrong side of 30 degrees C.

Judy was the first to spot what looked like an old New Zealand outside dunny – a boxlike structure on the footpath between beach and road. As we came to a stop in its small shadow, we caught a whiff of urine – someone had pissed against the side of it. On the ground lay an old hypodermic syringe and Judy pushed it out of the way with the toe of her shoe.

We pulled out our lunch and sat on two plastic shopping bags to insulate us from whatever other nasties were around, grateful to get away from the sun.
A fresh breeze was blowing off the Adriatic, half a dozen windsurfers were enjoying the conditions and on the beach couples and small family groups were doing the opposite of us – soaking up the sun. Among them was a topless woman flat on her back. She was as brown as two berries with bikini briefs that matched her bright red beach bag. She clung to the bag with her left hand, as though fearing someone might snatch it away at any moment.


This stretch of coastline was less glamorous than the mile upon mile we’d cycled past over the previous two days. It was low rent, with few cafes and bars and none of the shops selling beachwear and cheap jewellery. 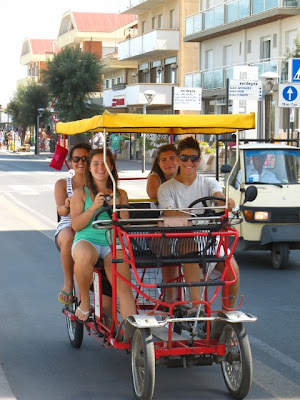 Behind us on the other side of the road was a kind of mobile home ghetto – most of their occupants inside hiding from the sun. One fair skinned couple emerged to sit in their sunchairs on the pebbly beach – within minutes the woman had had enough and stood up. A gust collapsed her beach chair and she picked it up, turned its back to the breeze and the view and sat down facing us, determined to keep on reading. But you could tell she wasn’t having a good hair day.
Among all the prone bodies a solitary, lonely figure approached. He made a beeline for us, waving a bright square of material at us – a kind of shawl. We declined that and his other tack. As he moved away he hesitated, his attention on the tandem. “Where you from?” he asked. We explained briefly we were New Zealanders and that we’d cycled from Britain.  He seemed a gentle soul as he wished us well and wandered off looking for other signs of life. 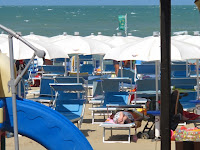 We packed up our lunch things and cycled into the heat – 20 kilometres away Ancona promised a night of comfort for a change in a hotel bed.

JUDY'S QUOTABLE QUOTES
On tipping in Italy where a service charge is usually included: “I give of my personality.”


“I don’t know how much I should eat out of my crutch,” on having dropped crumbs in the lap of her cycle shorts.

It billed itself as Camping Tahiti, and they were doing their best to convey a Pacific Island theme. The restaurant was called "Moorea" and the toilet doors were painted with images of palm trees. When we arrived the campground was almost full, but they squeezed us into a pitch in a far corner and charged us E37.00 for the privilege - our most expensive campsite yet.
﻿

Most of the campers were Italians - in tents, mobile homes, attractive little cabins and caravans. This is the Riviera Romagnola - a 110 km stretch of Adriatic coastline from Ravenna in the north to south of Rimini. It's a region where Italians who can't afford or don't want the more exotic, go on holidays often with their neighours. A place where seaside swimming is less important than other things - the entertainment, the beauty parlours, the food and the campground facilities.
﻿﻿
Our neighbours that night incuded two Italian families in separate cabins - the two husbands entertained us as they plugged a hairdryer into an extension lead and blew hot air over the charcoals on the bbq to speed things up. Kiwi blokes take note: here's another use for the wife's hairdryer.

In case we should want to leave the "village" we were issued with paper bracelets so we could get back in. The swimming pool was stunning, but the sea was a kilometre away - rides were offered in a "train" which went on the road.

Posted by Mike Brockie and Judy Yeoman at 03:32