A Spring Roll in my Cap

As a couple of cyclists who enjoy our food, we thought we might starve while cycling in Malaysia during the month of Ramadan - when good Muslims fast from sunrise to sunset.

No problems, our KL friends assured us. There will always be Chinese restaurants open and anyway, people are a bit more relaxed about Ramadan in Sarawak, in Eastern Malaysia - our starting point for this ride.

Our friends were right, but we forgot to ask them about Brunei - the oil-rich Sultanate which describes itself as a "Malay Islamic Monarchy" and takes its religion seriously. 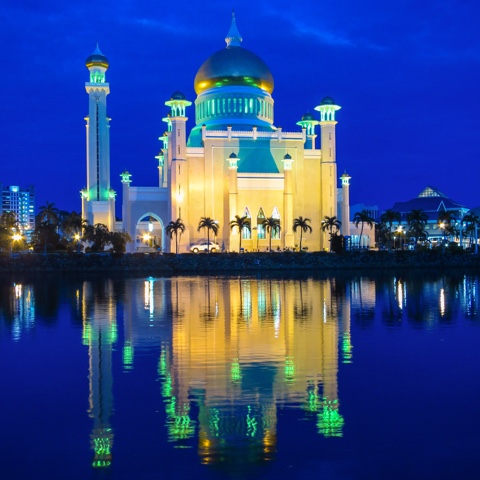 Masjid Omar Ali Saifuddien Mosque in Brunei's capital is stunningly beautiful at night. A sign on the gate politely said that during Ramadan it was closed to non-Muslims. A pity. We would have loved to look inside.

After a couple of weeks in Sarawak we crossed the border into Brunei and the next morning went looking for breakfast. The first restaurant we saw refused to serve us, but we managed to find a place selling takeaways. We bought Nasi lemur (chicken, rice, sambal, anchovies, peanuts and cucumber) and went back to our hotel room feeling a bit guilty, but not guilty enough to stop us scoffing the lot. 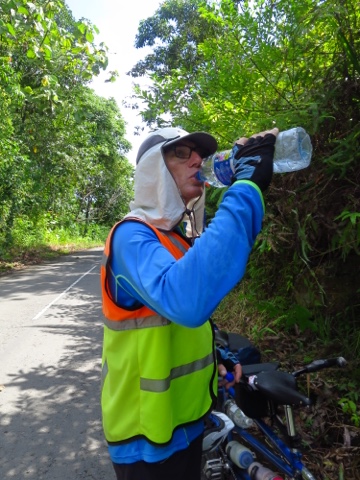 Glug, glug, glugging on a quiet backroad in Brunei.

And it's been a bit like that for the last few days. No eating or drinking in public between sunrise and sunset. In the last two years the laws of Brunei's
Syariah Court have been toughened up so anyone caught breaking them can by fined 4,000 Bruneian dollars (BND$), which is about the same in NZ dollars. Oh, and you can go to jail for a year as well. Doesn't matter what religion you are.

This may not sound a big deal, but just try riding a bike in 32 degree temperatures for 30 km or so. Chances are you are going to want a big glug out of the five litres of water stashed in plastic bottles on the bike's frame. It's tempting, too tempting. 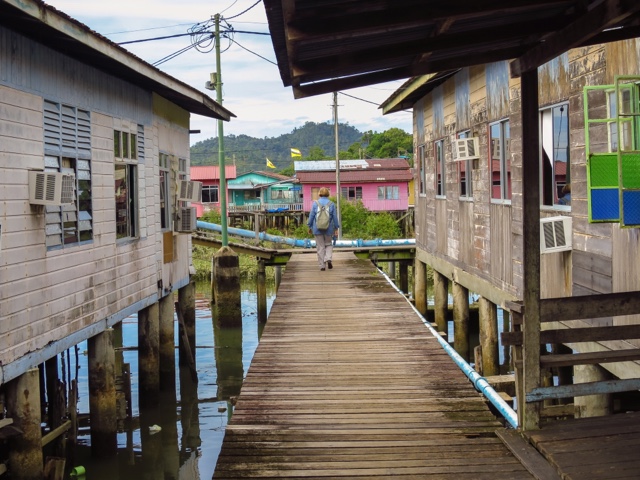 We visited Kampung Ayer in Brunei's Bandar Seri Begawan, said to be the biggest water village in the world, housing 20,000 people. Not many of them were around. We went unescorted, but we saw tour guides knocking fruitlessly on doors having promised tourists they would share a cup of tea with the occupants. We felt strangely uncomfortable about the whole thing, like bringing in international tourists from Auckland airport and inviting them into people's homes in Ponsonby.

We have taken to pulling off the road and gauging the gaps in the traffic so we can grab our water bottles, take a slurp from them and then put them away before the next car.

It's not just the Syariah Court that worries us. We strongly believe that as visitors to other countries we should abide by their rules, whether we like them or not. But sometimes it's not easy. 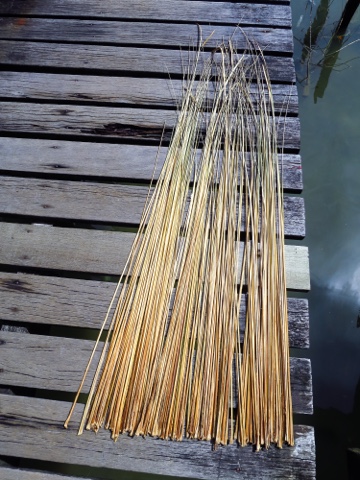 The other day we spotted a rural roadside restaurant and bought a couple of cans of coconut juice, hoping we might be able to bend the rules and sit down to drink them in such a quiet place. But it was a no, so we cycled down the road 200 metres and stood behind a tree - our backs turned to the stream of traffic.

Judy was feeling peckish as well, so pulled a couple of spring rolls out of a pannier and hid them in her cap, eating them surreptitiously.

We rode into Brunei's capital, Bandar Seri Begawan, gasping for water. We stood on the Esplanade, baking in the heat. Only a couple of people around, so we did some quick glug glugging and got away with it. 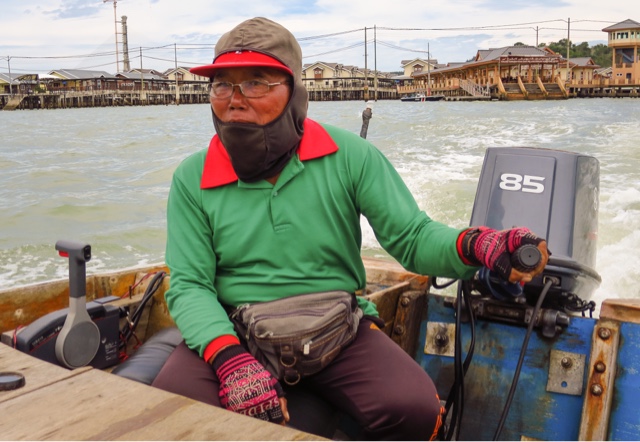 Boatman, Bandar Seri Begawan.  Need a fast ride across the river? He's your man. 85 horsepower on the back and not a life jacket to be seen.

Things improved at our hotel in Bandar. For an extra BND$5 each, they served us a western style breakfast of scrambled eggs, baked beans, sausages and toast. Perfect. We went sightseeing on full stomachs but left our drink bottles behind, knowing they were likely to be a problem. 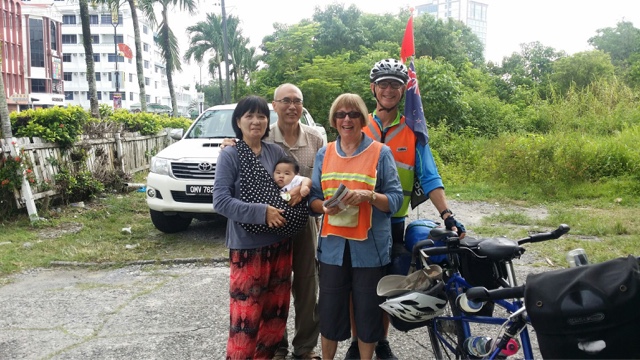 We have met some delightful people along the way. This couple own the Brooke Inn, where we stayed in Miri, Sarawak. We hope we will see them when they visit NZ next year. 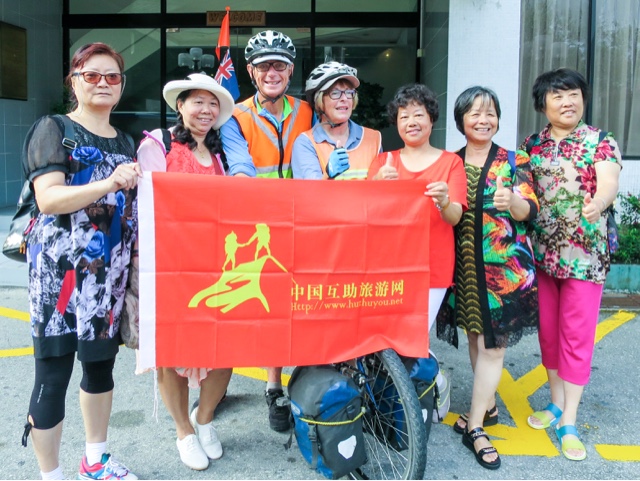 This group from Guangzhou, China, were on a package tour and staying at our hotel in Bandar Seri Begawan. They spotted the bike as we were about to leave and were fascinated. One of them insisted on draping the flag over the handlebars, but we don't know its significance. 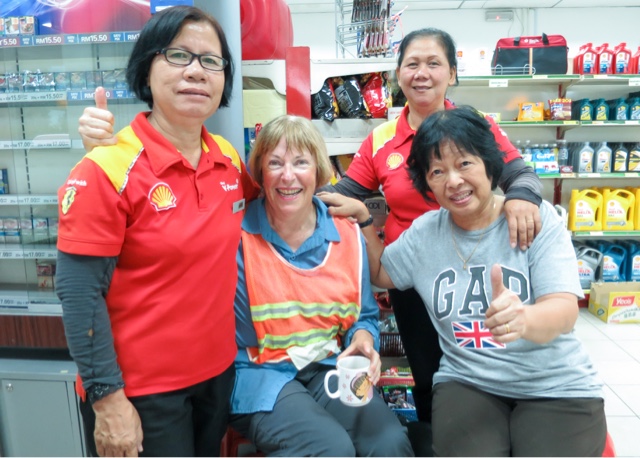 These women offered us shelter inside a Shell service station while we waited four hours for the rain to stop. They fed us coffee and biscuits and sent us on our way with small gifts of drinks and more food. 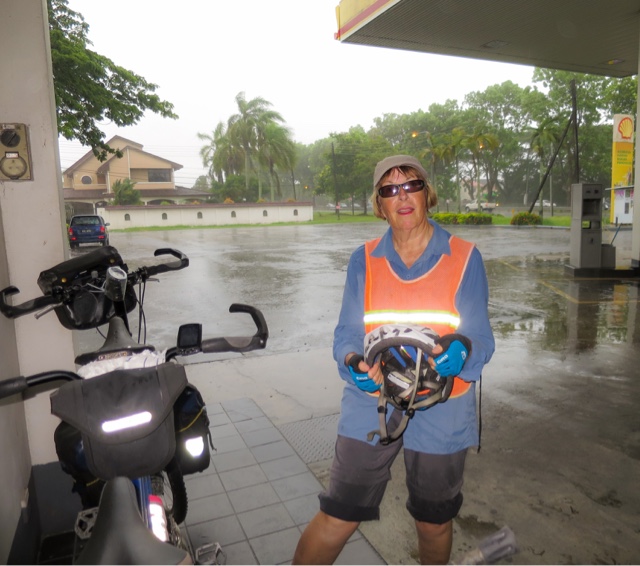 Judy waiting out the rain on the outskirts of  Miri. We have had very little rain, but when we have it's been heavy and too dangerous to ride.

This afternoon we cycled out of Brunei and back into the Malaysian state of Sarawak. I was promising myself a beer at the first Chinese restaurant we spotted. But Limbang seems to be a dry town, almost as dry as Brunei. No sign of beer anywhere. One local I asked pointed to the market and said I could get smuggled beer there, but I would probably have to buy a box, and he indicated a size big enough to hold a couple of dozen cans.

I wanted a beer (or maybe two) not a party, so have had to make do with (more) canned coconut juice. Sometimes it's tough being a cyclist. 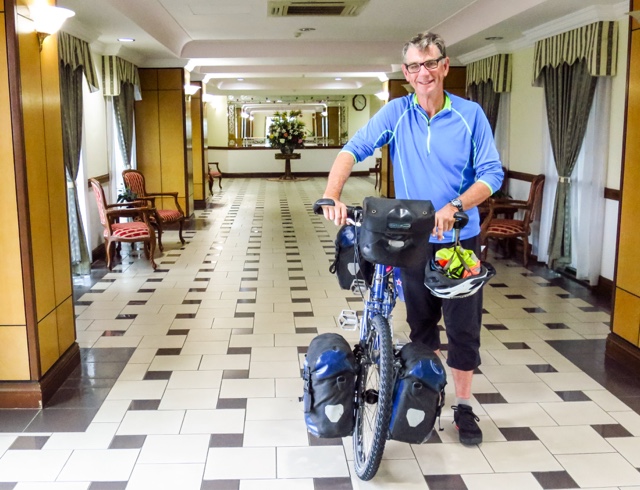 The Beast of Burden has been getting used to some pretty flash surroundings. Here he is at the Halim Plaza Hotel, in Tutong, Brunei. Six floors up. He had a carpeted corridor all to himself.

On being passed by the Sultan of Brunei's motorcade: "I just made eye contact with him. He was wearing a very striking outfit. (pause) Why wasn't I invited in for coffee? Maybe my wet weather overshoes weren't stylish enough." 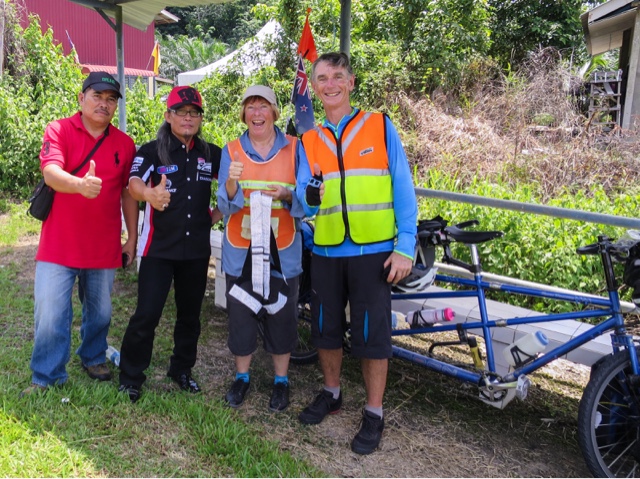 This afternoon we were stopped as we approached Lawas by three men in a van  (one is taking the photo). We met a cycling friend of theirs several days ago in Tutong, Brunei, and they knew to keep an eye open for us. They insisted on giving Judy a gift of a hi viz top, to keep us both safe on the bike. They are lovely guys and we wish them all the best with their own cycling adventures.

Posted by Mike Brockie and Judy Yeoman at 00:15