Judy's quotable quote as she peers into a bakery while wearing sunglasses at dusk, "I can see a woman behind the counter in that shop, or is it just a cake." 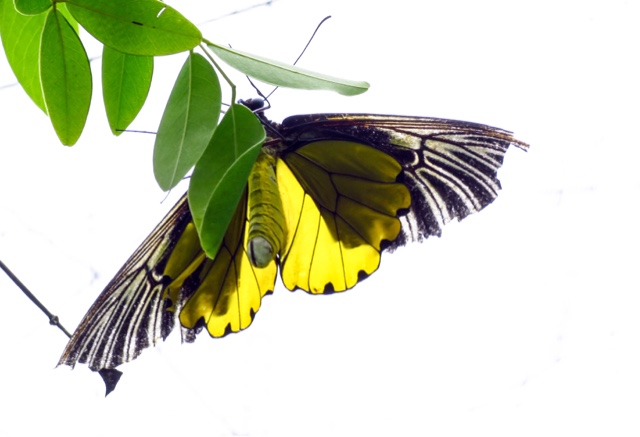 Butterfly at Poring Hot Springs, on the lower slopes of Mt Kinabalu. Keen walkers scale the 4,000m peak. We chose to spend the afternoon in the butterfly enclosure.

Lightening the Load
Judy still refuses to hand over the first aid box and I am convinced there must be something in it we could discard. For example, how many packets of diarrhoea stoppers do we really need? Admittedly they don't weigh much, but every gram counts and now is the time to review what we are carrying on the tandem. We head to peninsula Malaysia on Tuesday. 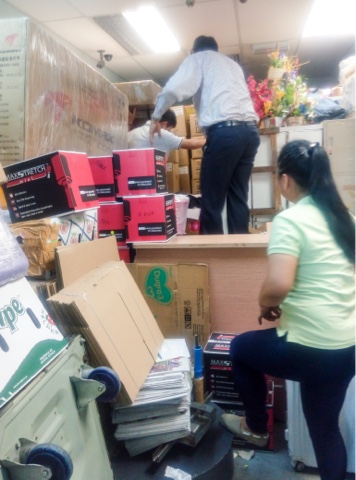 A small army was roped in to store our bike at the left luggage at Kota Kinabalu airport. The Left Luggage Department doubles as a frozen fish shop, inside the terminal.

So far the pile to be posted home includes our air mattresses and a silk sheet, and some warm merino clothing we brought in case we go to the Cameron Highlands. Now we have decided that if we do go, we will just buy a couple of extra t-shirts at the time. Right now, we want weight off the bike.

I am sacrificing the electric water heating device I bought in KL. It enables us to make a cup of tea first thing in the morning, but we hardly use it. It can go home. There is my Buff neck warmer (what was I thinking) and a map of eastern Malaysia that we have finished with.

It may not sound a lot, but it feels a lot when we pick up the plastic bag. 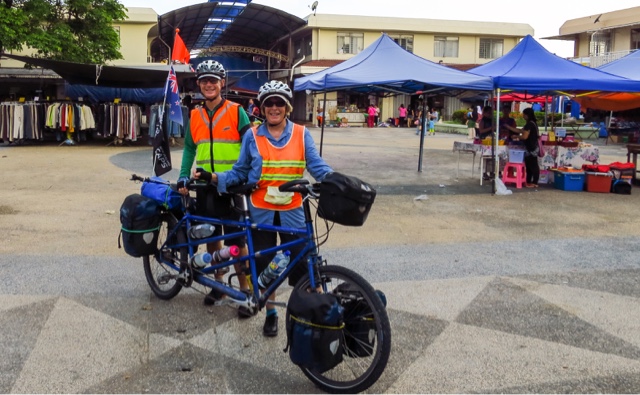 Loaded up and ready to leave Papar, on the road to KK. We are offloading a few things and can get rid of the small blue bag on the rear rack.

There is an added benefit to lightening our load. We have made so much room in our panniers that we can dispense with the bag on the rear rack. And that helps get the bike's centre of gravity lower and make it easier to manage. Now if only I could get into that first aid box.

We are enjoying our time here in Kota Kinabalu, or KK as the locals call it. It's yet another town that was bombed to bits by the Allies during WW2, after the Japanese invaded. So there's not a lot character. It's a concrete jungle. Much of the downtown area is built on reclaimed land, but that's allowed room for a pleasing mixture of produce markets, hotels, a few waterfront restaurants and big shopping malls. 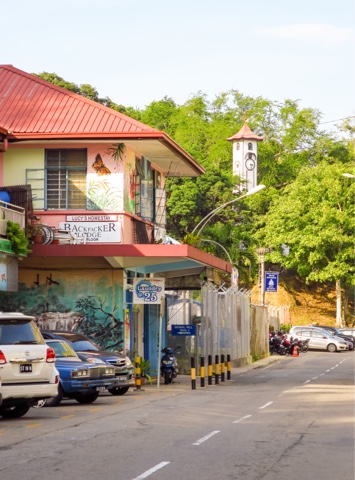 The Atkinson Clock Tower is one of the few old buildings that remains in Kota Kinabalu.

We have been resting, walking, eating and doing a few necessary chores such as booking our flights to Johor Bahru, on peninsula Malaysia, and researching our route from there on. 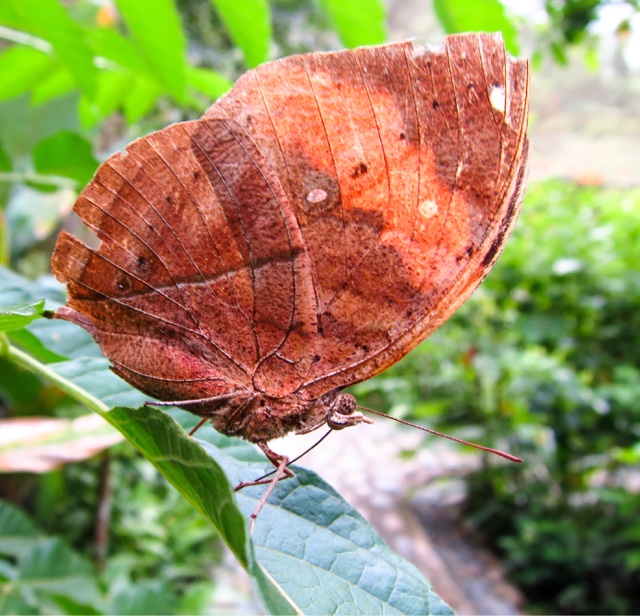 Camouflage butterfly pretending it's a leaf. 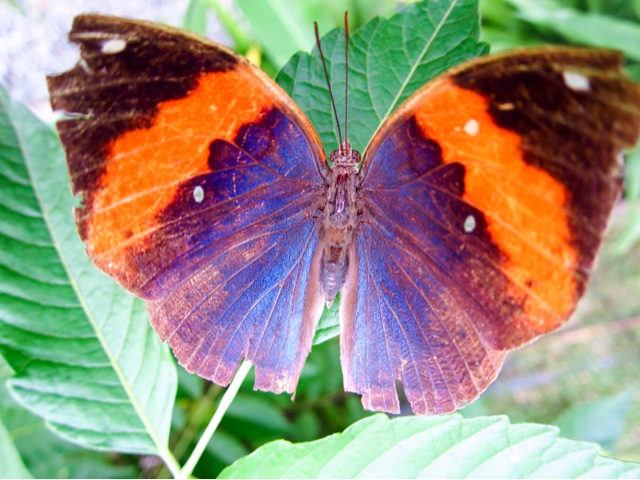 The cycling has been quite challenging, especially until we realised we were just physically incapable of doing the kilometres we had expected and reduced our daily target. 80km is the maximum for us in this heat, and several days we have only done half that. However, we are acclimatising and by setting off early in the morning before the heat builds up we are coping better as the days go by. 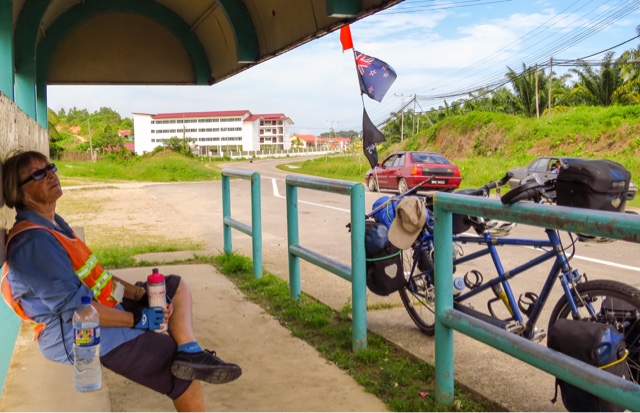 Taking a break in the shade of a bus shelter as we approach KK.

We always attract attention on the tandem and here in Malaysia there has been even more focus on us than usual. We have had offers of money, been photographed countless times by drivers who take both hands off the wheel to steady their phone cameras, been tooted at, cheered at and forced to stop by people who just want to talk. We have been interviewed by the local newspaper and Judy was given a red rose by a driver. He drew alongside and stretched across to pass the rose out the passenger window, while all the time nudging us ever closer to the edge of the sealed road and the gravel. Somehow we and the rose survived. 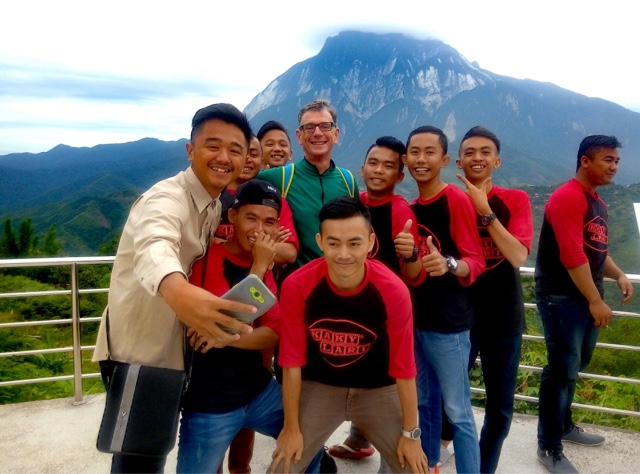 Even without the tandem, people seem to want to take our picture. Are we freaks?

We have been woken before dawn by the call to prayer. In the town of Beaumont it wasn't just us. Every stray dog in the neighbourhood leapt to its feet and started yelping as if in pain. It was 4.45 am and all we could do was laugh. Sleep was impossible.

We find we are laughing a lot. Today we cycled out to the airport and spent several hours in a quiet corner of the terminal packing the bike. When the job was finished we took the two boxes to the left luggage area, which is run in conjunction with a frozen fish shop in the terminal building. The room out the back was stacked to the top with cartons and a few items of passengers' luggage. It was hard to see where the bike would fit until the manager was called in. 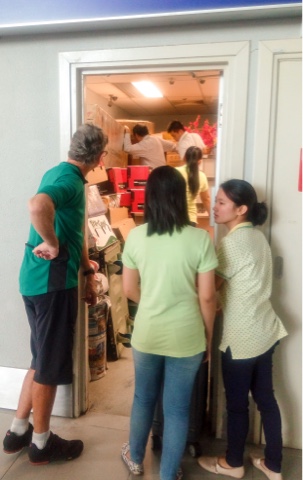 "Can do, can do," he repeated as he threw his small army of staff at the task of making room. We counted six of them. The breakthrough came when the second most senior man took one of the boxes and balancing it on his head, scrambled onto a bench and into a far corner.

Clapping broke out, we shook hands all round and promised we would be back in two days. 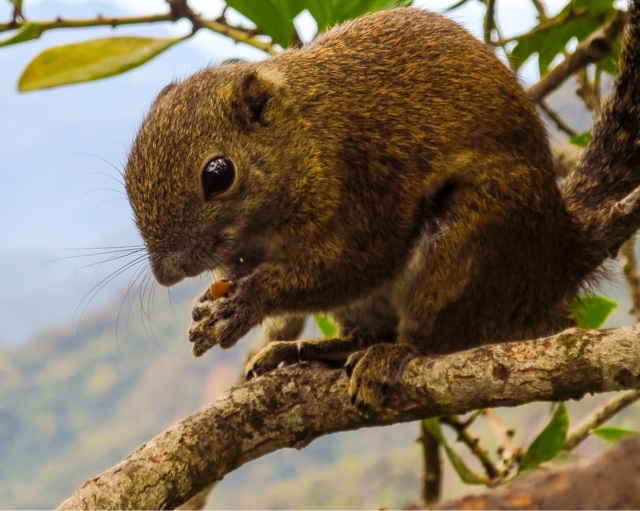 Squirrel at Mt Kinabulu Park. So tame they eat peanuts out of people's hands. 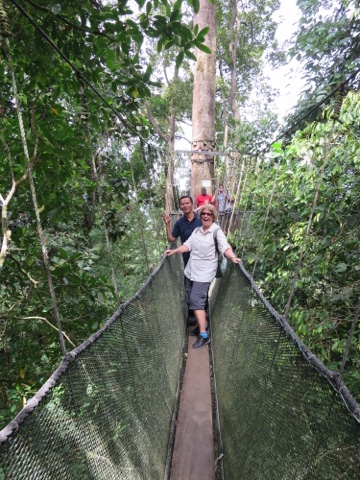 Judy on a canopy walk. Much the same as crossing any swing bridge on a kiwi tramping track, except here you pay MR5 if you want to take a picture.

While we have been in KK I have had a birthday - my 66th. We went to the waterfront for dinner. It was one of those beautiful tropical nights, a Somerset Maugham moment, with the slightest of cooling breezes and lights flickering in the soft darkness from the fishing boats at anchor.

It was a pity the Filipino waiter didn't know how to pour beer, and forgot the order for the next table. We felt sorry for him, he was just a kid far from home and trying his best. But the manager was on to him and he wasn't going to last long.

We left him a decent tip. It was the least we could do considering all the kindness we have been shown. 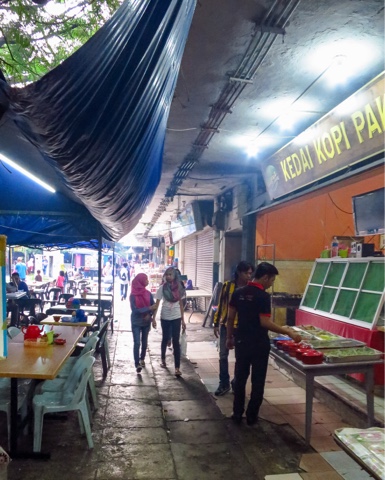 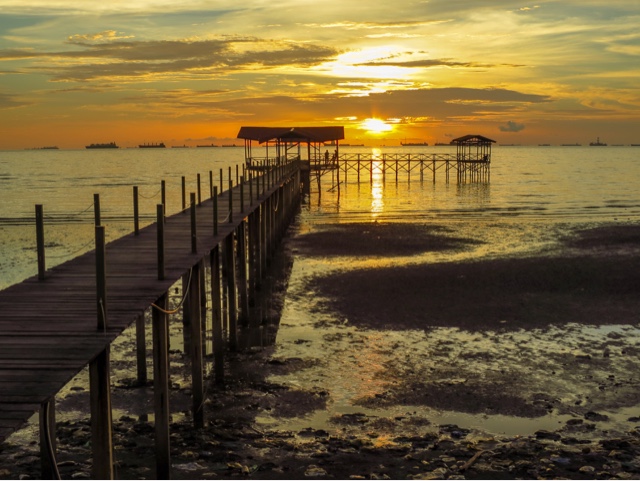 Posted by Mike Brockie and Judy Yeoman at 21:30