Current Location: Kuantan, capital of Pahang and Malaysia's second biggest port.
Distance Cycled This Trip: 1,198km.
Hotel Room Prices: RM50 to RM115 (NZ$17.60 to NZ$40.48)
Hotel Costs in Sarawak, Sabah and Brunei tend to be at the higher end of the range, with peninsula Malaysia lower. 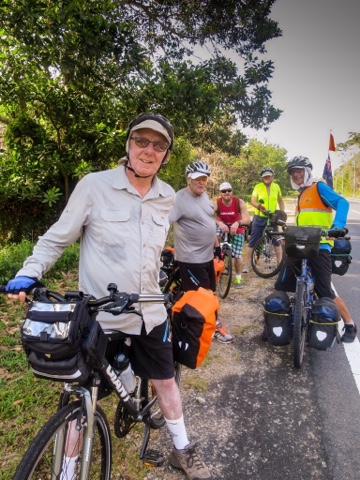 So far we have met four other touring cyclists on this trip, and they were from Auckland, NZ. Tristram, Wayne, Paul and one other (whoops, forgotten name) were following a similar route to us up the east coast of peninsula Malaysia.

"How do I look," asks Judy the Stoker.

Judy has been using a scrap of toilet paper to wipe away the sweat. She brushes her cheek with her hand and smiles. "N.G. for G.G. (Governor General)," she says referencing the Australian comedian Norman Gunston who famously stuck toilet paper on his shaving cuts.

"Fine," I say, both of us ignoring the stripe down the middle. Judy badly needs a hairdresser but is determined to hang on till she can go to her favourite in New Zealand.

She tucks her cycle helmet under her arm and heads for the swing doors to the hotel lobby, to find us a room. 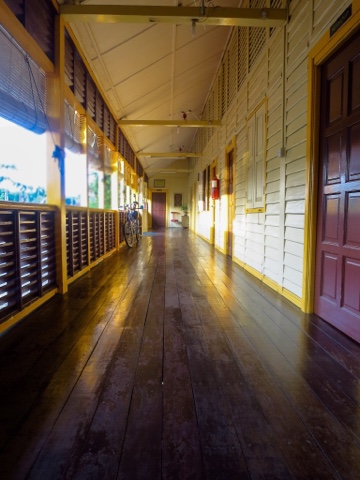 One of our favourite places on this trip. The Chief's Rest House in the Royal town of Pekan, Pahang state, Malaysia. Built in 1929, the wooden bungalow creaked with atmosphere. In the picture, our tandem is parked on the verandah but there was plenty of space to put it inside our room.

It is a familiar routine. I put the tandem on its side stand, pull a water bottle from its rack and stand guard over the bike to wait.

A few minutes later Judy emerges, giving me a discreet thumbs up. That means a lot of things - she has found us a room for the night, the price is right, it has air conditioning, there is somewhere to store the bike and wifi is available. All of them are crucial. 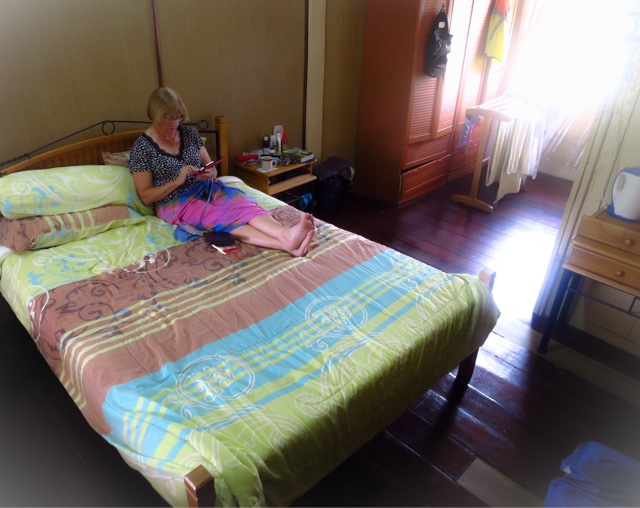 Judy conducts research from our room at the Chief's Rest House, Pekan. Wooden floors where guests and staff all walked barefooted - as good as summer grass between the toes. Room to move, a kettle, a bathroom with a resident snail for company and air con which only stopped working for a couple of hours. Bliss. All this for just RM55 per night.

We do not (generally) book in advance, which some people might think strange. Why not make it easy for ourselves by going online the night before?

The reality is that we often don't know where we will end up - road conditions, sights along the way, a puncture, even our own energy levels can all force us to change our plans. We do not want to be locked in.

Sometimes we are unaware if a town on our route even has a hotel. So far on this Malaysia trip we have only been caught out once and instead we found a (pretty dreadful) room to rent (a "bilik sewa"). 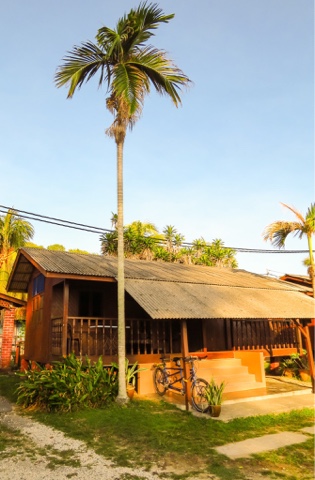 One of our less satisfactory stays. We went looking for a "local" beach resort instead of one overrun by foreign tourists. Sadly, we chose a village called Air Papan, north of Mersing. One resort was too expensive, another was full and we ended up in this place for a night. It may look romantic, but rain was destroying the wall linings, the loo smelt and the air con was locked on 16 degrees and poured buckets of frigid air on us until we finally turned it off. RM80 a night.

Another advantage of just turning up is that it gives us the opportunity to check out our chances of storing the bike. One way or another, we always get it off the road but a hotel with a ground floor reception makes life a lot easier. Once Judy has sweet talked the person on the front desk, we roll it in through the front door and park it in front of them, or in a corridor not far away.

Often the really cheapest hotels have their reception areas on the first floor and the bike has to be person-handled up stairs and around tight bends  - not much fun when we are hot and tired. 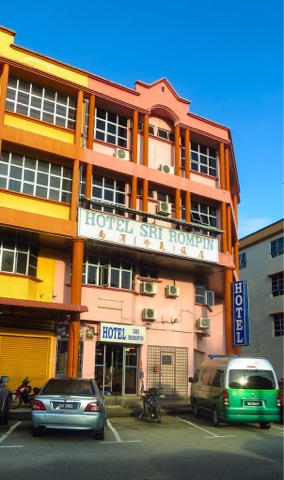 This hotel in Kuala Rompin has a key ingredient - reception on the ground floor. We were able to push the bike through the swing doors and park it in a huge storage area out the back. Our room was up on the first floor and it had another important ingredient - a window.

Almost as bad are hotel lifts. If there is no room downstairs, we can at a pinch get the tandem in a lift. But it means removing all the panniers and making sure they are safe while we angle the bike into the lift so that the front wheel is jammed against the roof and the back wheel is stuck in the far corner. It is harder than it sounds. As we try to get the bike in, the lift doors will be trying to squash us, the bike or any onlookers who get too close in their enthusiasm to capture our strange behaviour on their camera phones.

So when Judy emerges from a hotel and gives that discreet thumbs up, it is a heartening moment. We can both look forward to showers, time to relax and maybe even a beer if we can find one in this predominantly Muslim part of Malaysia.

Judy's Quotable Quotes
"So much goes on in a day, you get up, cycle and have no idea where you are going to stay that night."

Maps & Stats - copy and paste links below into your browser. 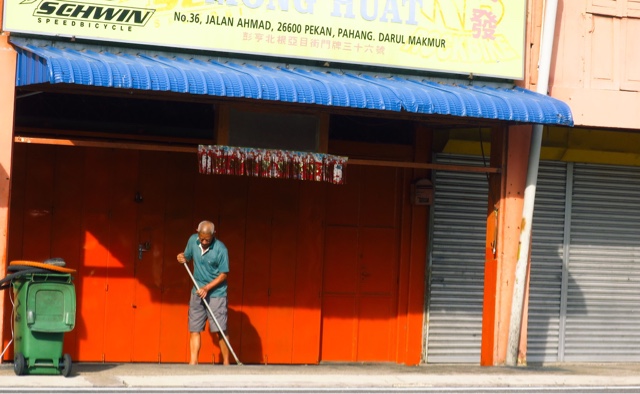 A few old Chinese shop houses remain alongside the river in Pekan. 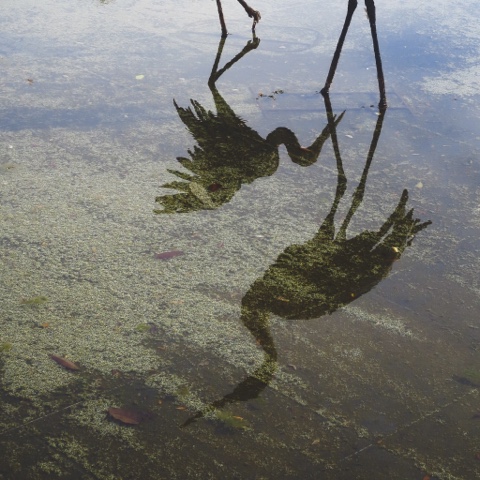 Reflections of wooden sculptures outside the (closed) museum in Pekan. 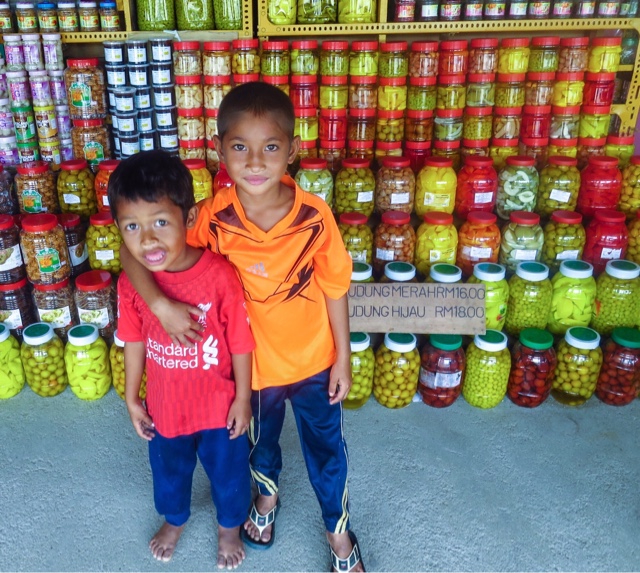 We met these two when we stopped at a roadside stall selling fresh pineapples and preserved fruit. They were particularly interested in the bike and spun the pedals til we got bored. We figured the one on the right was going to be up to all sorts of mischief when he's older. 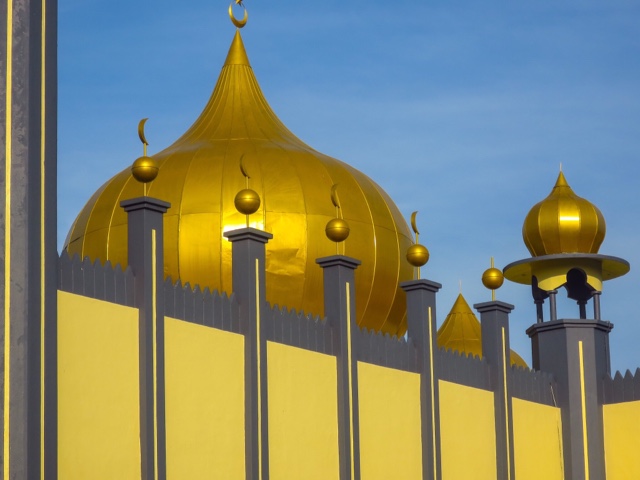 One of the gold domes on the Abu Bakar Mosque in Pekan. 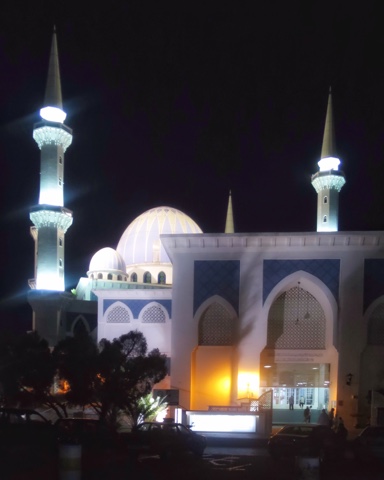 Another mosque, this time in Kuantan. Completed in 1993, it reflects some of the architectural style of the mosques of the old Ottoman Empire. 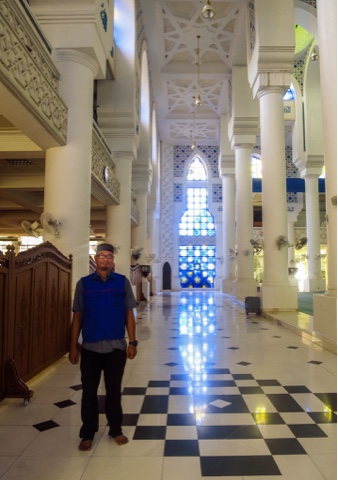 We took off our shoes and were taken on our own guided tour of Kuantan's mosque. It wasn't as long as we would have liked, but we saw enough to just about satisfy our curiosity.  One of those quirky bits of information we gleaned - new to us at least - was that the hats worn by men are to stop their hair falling forward over their faces during prayers - an absolute no no. Our guide laughed and showed us his bald head. He just liked his headgear. 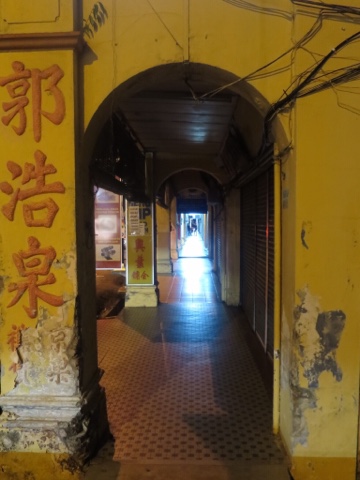