"I was perhaps the last explorer in the tradition of the past."
Wilfred Thesiger 1910-2003.

If ever we harboured over inflated feelings about our cycle adventures we have just had them burst.

Yesterday we met a true adventurer, an explorer, a man who turned his back on western civilisation for long periods to trek through some of the harshest land on the planet. 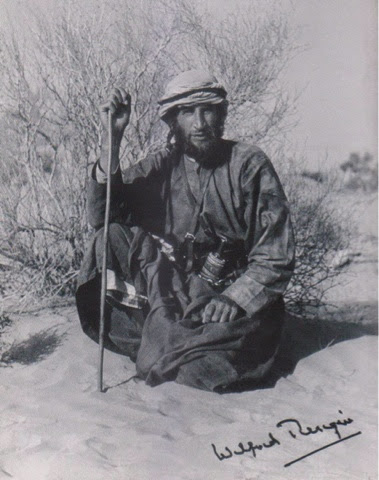 Unfortunately we didn't meet Wilfred Thesiger in person - he's been dead for a decade - but we saw some of his many photographs and heard him speak in an exhibition which looks back on his life.

Al Jahili Fort - once visited by Thesiger it now houses an
exhibition of his work.

The venue was Al Jahili Fort, a 90 minute drive from Abu Dhabi through the desert that Thesiger visited during two epic journeys in the 1940s. 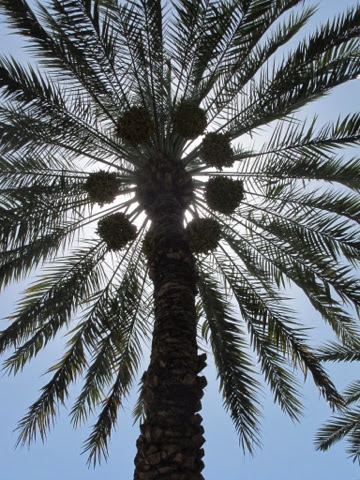 49 C and even the locals were
complaining.
Outside the fort yesterday, the temperature was nudging 49C and the car's air conditioning could barely cope. Inside the fort, the air was cool and the heavy shade revived us enough to study Thesiger's photos which capture so beautifully the desert of the Empty Quarter.

Thesiger was the last of the explorers in the style of the true expedition. He shunned "modern" aides like radio communication, carried their most precious supply - water - in goatskins because he felt it was appropriate and dressed in the style of his Bedu companions.

He once wrote,"I had felt the lure of the unexplored, the compulsion to go where others had not been."

Educated at Eton and Oxford, he saw himself as a traveller first and a story teller second. But his books are regarded as classics of travel writing. His best known work is Arabian Sands in which he describes those two journeys in the Empty Quarter from 1945 to 1950. It is recognised as a masterpiece. 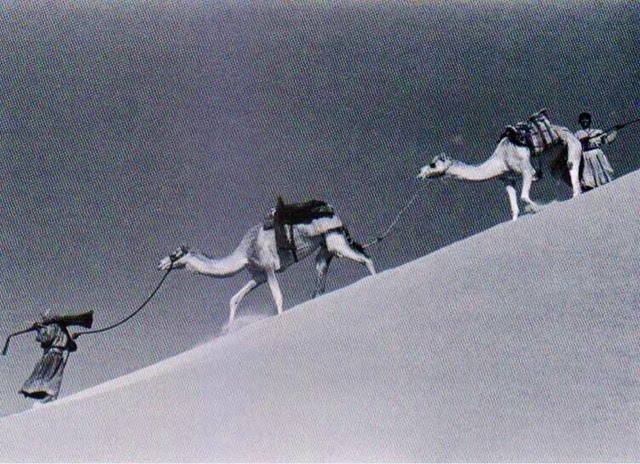 Camels descending a dune in The Empty Quarter.

The four of us looking at that exhibition were, I think, all moved by what we saw. Thesiger's photos gain from being in black and white. The long shadows of the sand dunes emphasise the desolation of the landscape and Thesiger's portraits capture the intimacy he shared with his small group of Bedu companions. 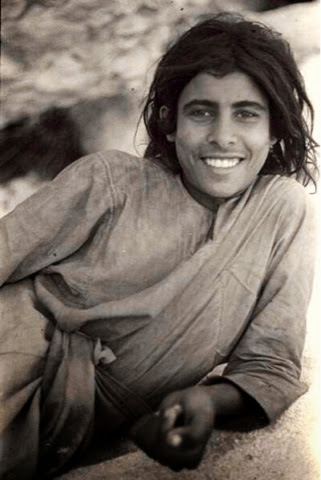 In contrast, travel in 2014 seems so easy. Every kilometre of the planet's surface has been google-mapped, wifi keeps us in touch, and where once there was only sand there are now oil rigs and skyscrapers. The Bedu tribesmen own 4WDs and the local paper warns that obesity - rather than starvation - is a serious health issue for people here. 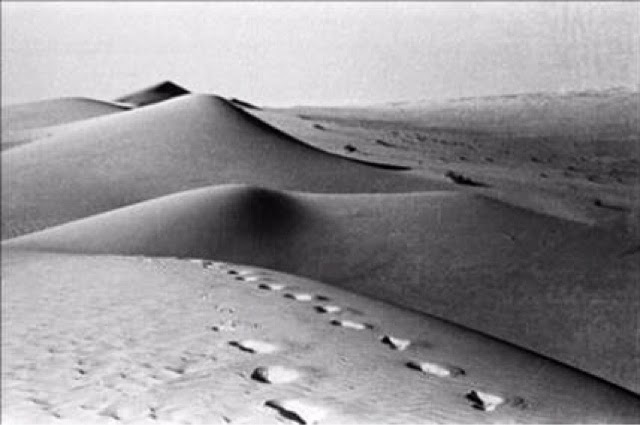 Thesiger returned to the region in old age, and eventually accepted the changes that had taken place in his absence. But his world has gone, and so too has his kind of travel.

Posted by Mike Brockie and Judy Yeoman at 22:40