Anyone who knows Judy the Stoker knows that a sense of drama, of suspense even, is never far away. We have been on the road less than a fortnight and I've been reminded of this on several occasions already. 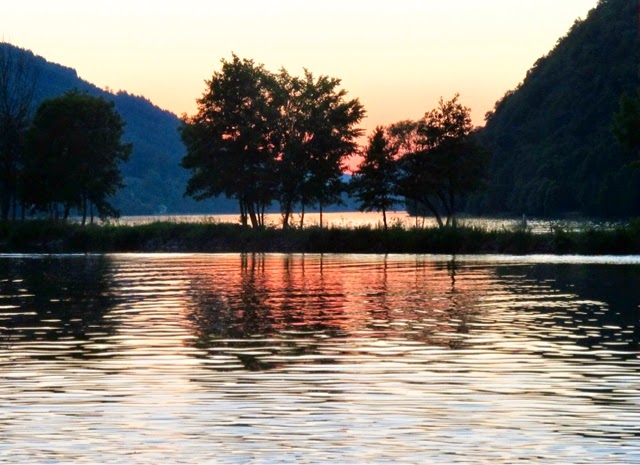 Sunset at Schlogen
The latest came this morning when the Stoker announced from the back seat of the tandem that she needed a loo stop. No big deal, we are both used to ducking into the bushes when necessary. Unfortunately, we were approaching Vienna on a cycle way and it was Sunday. MAMILs (Middle Aged Men In Lycra) were out in force, and behind every likely bush couples were relaxing before the onslaught of another working week in Austria's old imperial capital. 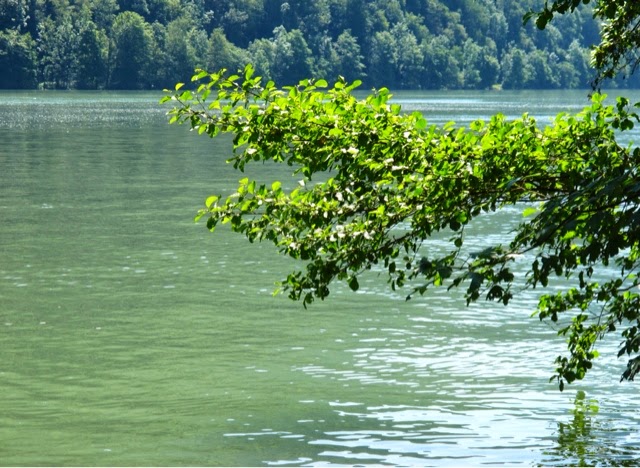 Morning on the Danube
As the pressure mounted and the cries of anguish grew more dramatic from the back seat, we pedalled on looking for any opportunity. Perhaps in sympathy, I began to feel the need as well.
Suddenly a banhof, a railway station, appeared and Judy made a rush for the platform. A moment later she re-emerged with a look of pain, of desperation, on her face.

"The door to the women's is locked, but I can get into the men's, there's a urinal. You'll have to stand guard.'

So it came about that the Stoker proved that women can use a men's urinal, by approaching it backwards and hoping that the bowl is not so high they can't stand over it. The relief. 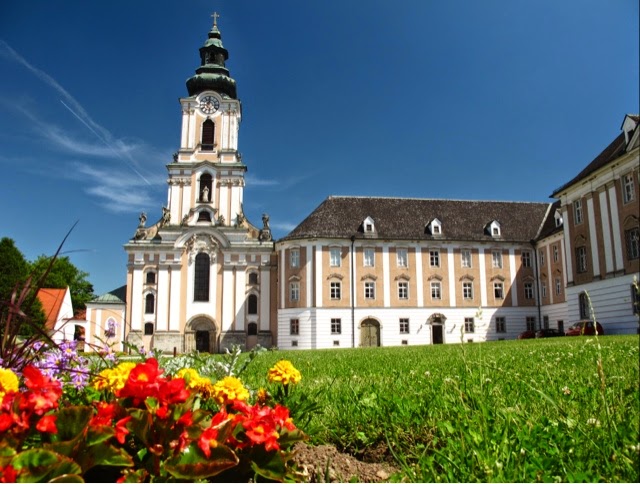 Wilhering Abbey, all to ourselves.
Which brings me to the broader subject of how to cope with a call of nature when cycling. For both men and women, behind a bush has to be the simplest and quickest. If there's no bush, women are at a distinct disadvantage as us men can simply turn our backs on passersby.

Judy did try something called a Shewee, but a test run in the shower at home proved unsatisfactory and she gave the device away to another female outdoor enthusiast.

Another alternative was put forward by long distance cyclist Josie Dew, the author of several highly entertaining travel books. She used a cape to provide privacy while she squatted, well, just about anywhere. The only hazard was pee puddles and a damp cape. 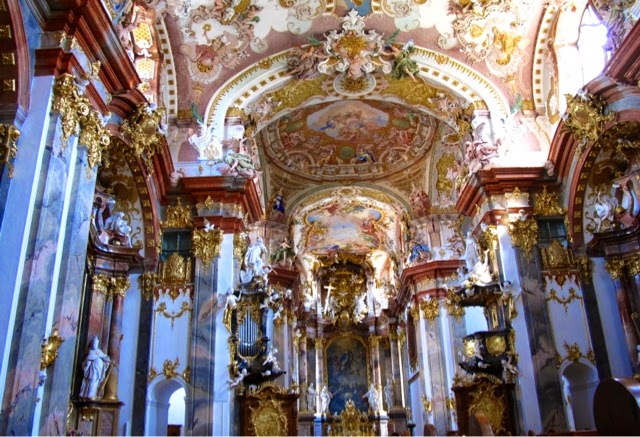 Religious bling on steroids - the interior of the Abbey at Wilhering. The style is rococo, the result totally over the top.
Today's suspense is not the only drama of the past few days. We were enjoying our cycling ritual of morning coffee at an outdoor cafe when Judy exclaimed, "My wedding ring, I've left it behind."

Behind in this case was 20 km away at the last campground at Grein, and if there is one thing cyclists hate doing it is retracing their tyre tracks.

"I left it in the women's, or perhaps on that table by the tent. Or maybe, it's in that little pocket in our tent and I haven't left it behind at all."

The logical action would have been to unpack the tent and check if the ring was there. Together though, we settled for the suspense of waiting all day until we unpacked at the next campsite. When we did, no ring. 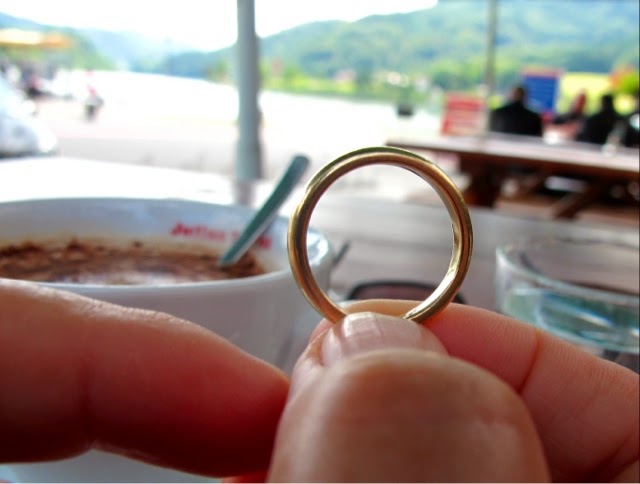 Found and collected
After a couple of phone calls, it was established the ring had been found - at the table - and the following day we spent one and a half day's budget using public transport to go back to Grein to collect it. 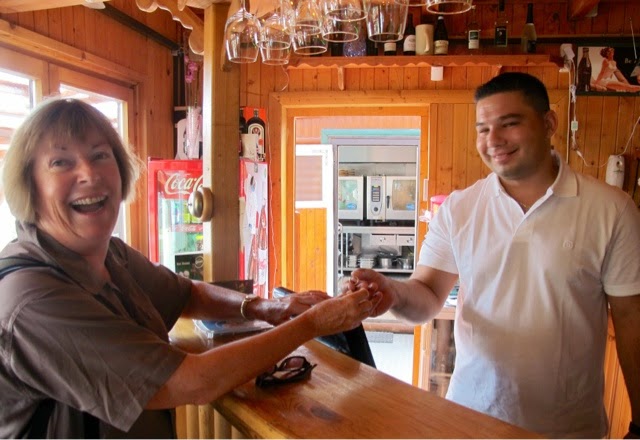 Barman returns Judy's ring at our campground at Grein, Austria. 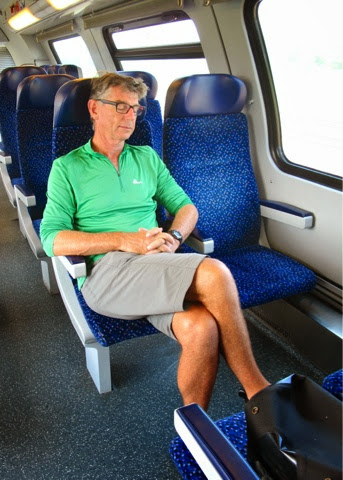 Mission to recover the ring
accomplished. Mike the Captain takes
40 winks.
Oh, and then there was me trying to inject my own bit of drama. Just as I deftly dodged a snake wriggling across our path there was a yelp from Judy. We screeched to a halt and she  lurched from the bike clutching her neck. For a moment I had a vision of some kind of acrobatic snake, but it turned out she'd been stung, probably by a wasp. 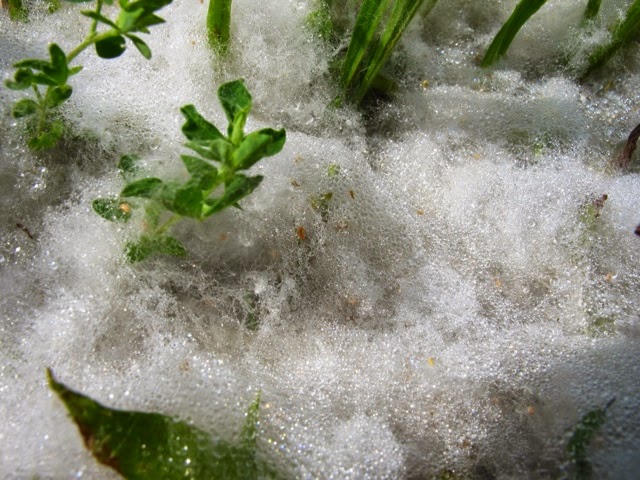 Pollin like snow, floats around us as we cycle.
"You're going to have to monitor me for anaphylactic shock", she instructed, and then reminded me she had been allergic to stings when she was a child. We carried on, and for a little while Judy was unusually quiet. 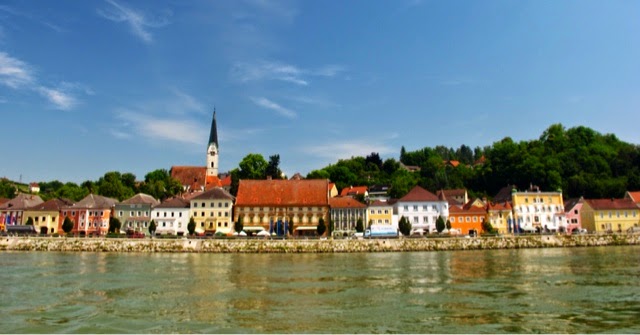 We had passed Linz and Mauthausen, Danube towns which long ago moved on from their terrible associations with Adolf Hitler.

All of a sudden I heard humming from the back seat. It was an old army marching song. Then the Stoker started singing:

"Hitler has only got one ball,
Goring has two but they are very small,
Himmler has something sim'lar,
But poor old Goebbels has no balls at all."

I relaxed, the Stoker was going to be ok. 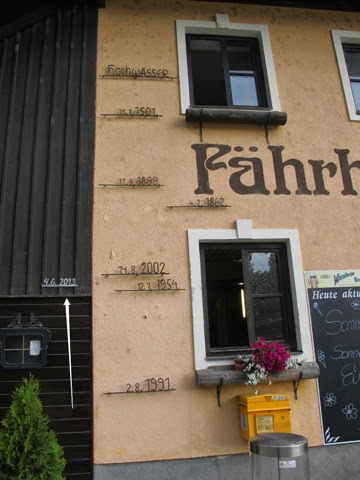 The arrow indicates the height of last
year's Danube flood at Melk. 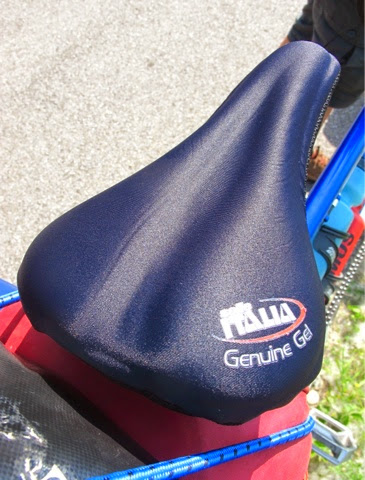 Quotable Quotes
Judy the Stoker as we pass under high voltage power lines: "Now I'm infertile and tonight I'll glow in the dark".
And also from the Stoker: "'86 ks in the Saddle', a book by Major Bummsaw." 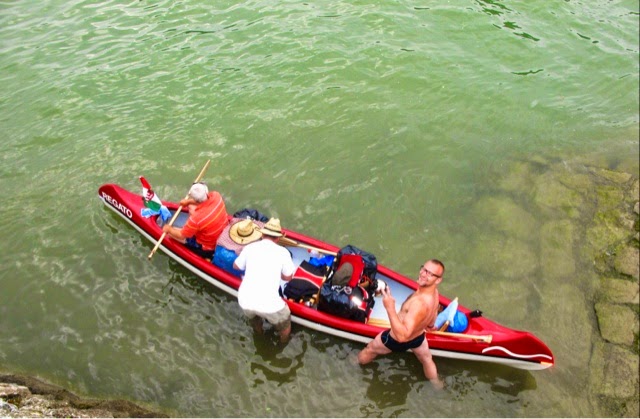 This canoe and its crew is one of two making an 800 km trip down the Danube from Passau, Germany, to Budapest, Hungary. 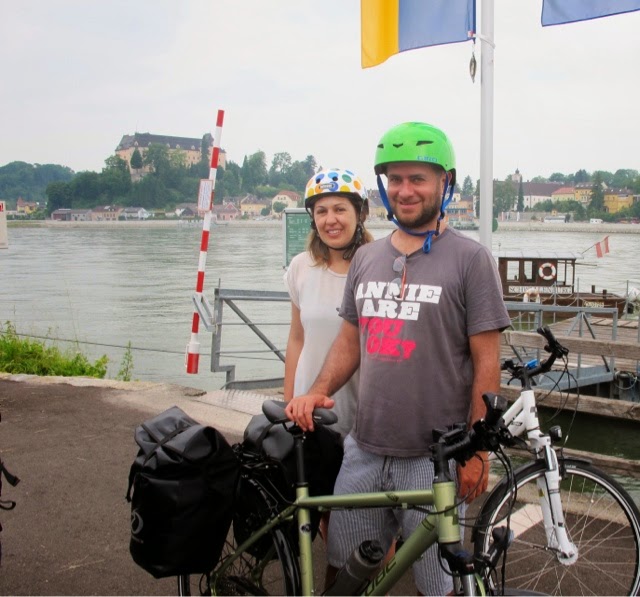 Radji (foreground) and Fernanda from Brazil. Making their way by bike to Vienna. We met them on a ferry crossing the Danube at Grein. 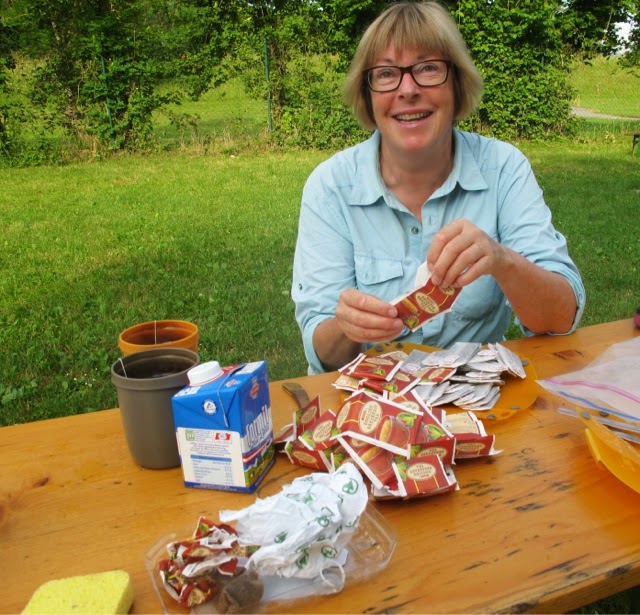 Judy unpacks tea bags from their individual paper packets to reduce the space they take up. This way we can store them in the kettle.

Posted by Mike Brockie and Judy Yeoman at 03:56