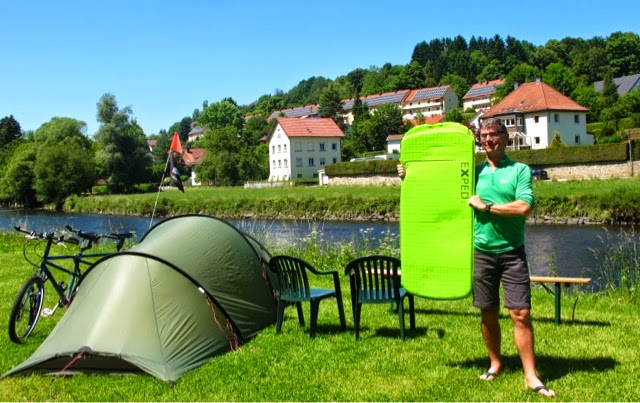 Mike with Exped air mat. When size is everything this packs up small.

Laughter spilled from the tent. "I feel like I'm crushing a small child. I want to apologise to it".

I peered inside and there was Judy the Stoker rolling up my new air mattress. This is version three and at last I've found one that meets our criteria. First of all it packs up small - much smaller than even a small child - and on a bike, size matters. It's also comfortable, and quick to inflate and deflate.

The mattress is just one of several changes we've made to improve our equipment for this trip east along the Danube to the Black Sea and hopefully beyond. A new iPad Mini is lighter and smaller than its predecessor, a Kindle has gone and we have shed some clothes. Somehow our front panniers are half empty so when we stock up on food each afternoon we have somewhere to put it. It may be our imaginations playing tricks, but the tandem feels lighter too.

We arrived at Munich airport on a cool, cloudy afternoon and found a quiet spot outside the terminal (to the right as you exit), under cover and with a couple of steel benches - perfect for assembling the bike. 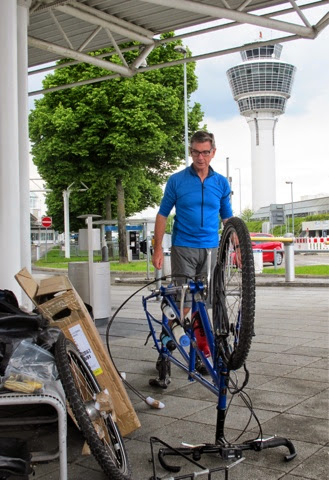 Assembling the tandem outside the
terminal at Munich airport.

By the time we had done that, plus changed money, drank coffee and climbed into our cycling clothes, three hours had vanished. 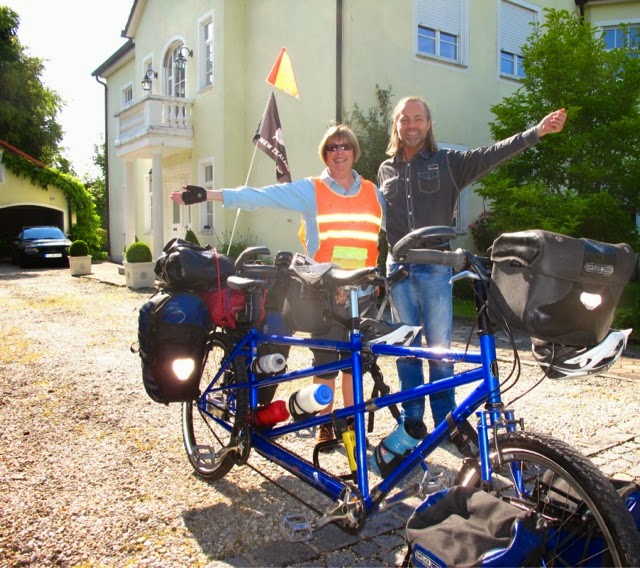 Judy with Jasper, our Airbnb host at Erding, near Munich.

But the GPS worked and led us the 15 km to our Airbnb accommodation in the town of Erding. We spent a couple of nights there, just enough time to explore Munich before we headed off to join the Isarradweg, the cycle path alongside the Isar River which runs north to join the Danube.

It was perfect cycling - a path mostly for bicycles and pedestrians, lots of "nature" as the Germans say to us, and plenty of places to buy food, even if we did have to leave the cycle path for a couple of kilometres. 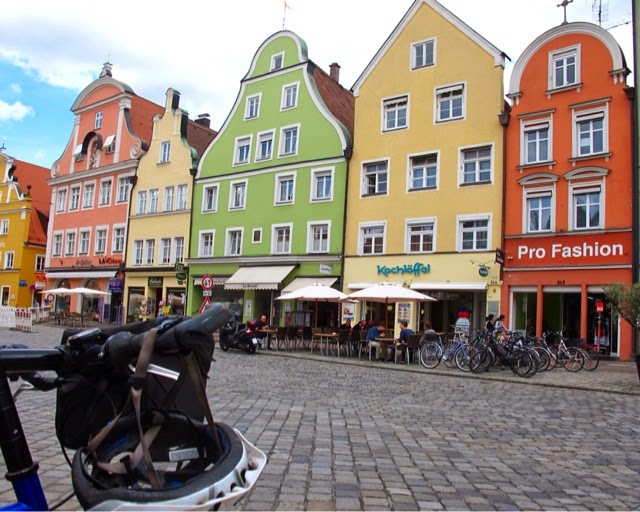 Landshutt, Germaby, where we met a man who told us it was 3,333 km
by road to Tiblisi, Georgia from Passau, Germany. He knew - he had
driven it.
We have slipped back into touring mode as though we never left it. Once again we are governed by life's essentials - food, water and somewhere to sleep. 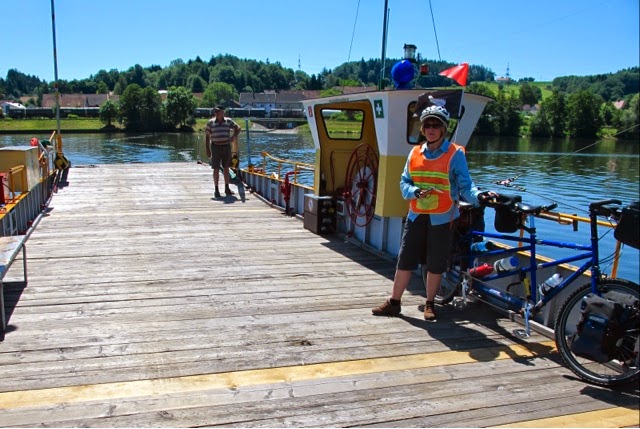 Ferry across the Danube.

For those contemplating the route, there are campgrounds near Eching (Kurz Welher), at Piflas in Landshut (shown on our map but unsighted by us), at Mamminger-Schwaigen and at Rosshofen near Osterhofen, despite what the Tourist Office people may tell you in Munich.

On the fourth day we lost the Isar as it drifted through wetlands and emptied into the Danube. 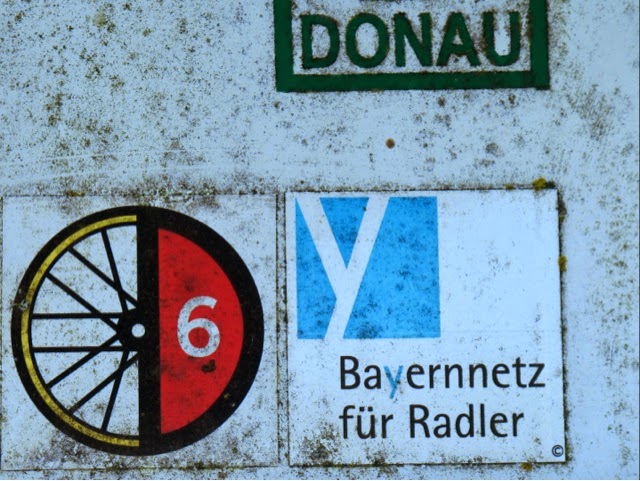 First Eurovelo 6 sign of this trip - we are on our way east.

Suddenly we saw our first Euro Velo 6 sign, then the Danube itself and knew we were back in familiar territory, having been this way two years ago. Hopefully these EV6 signs will help guide us for the next 2000+ kilometres to Constanta and the Black Sea. 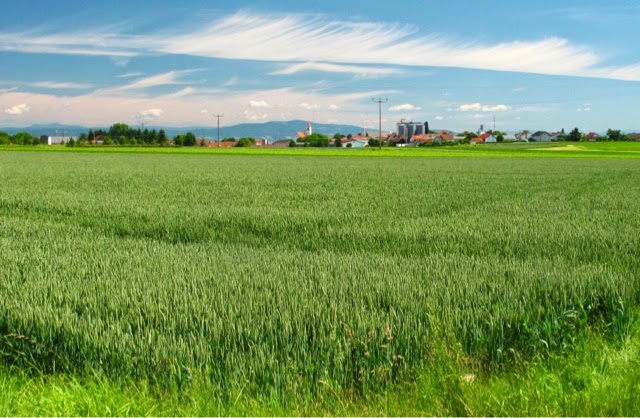 With the Danube came cyclists - dozens of them. The next stretch from Passau in Germany to Vienna in Austria is the most popular section of the ride. 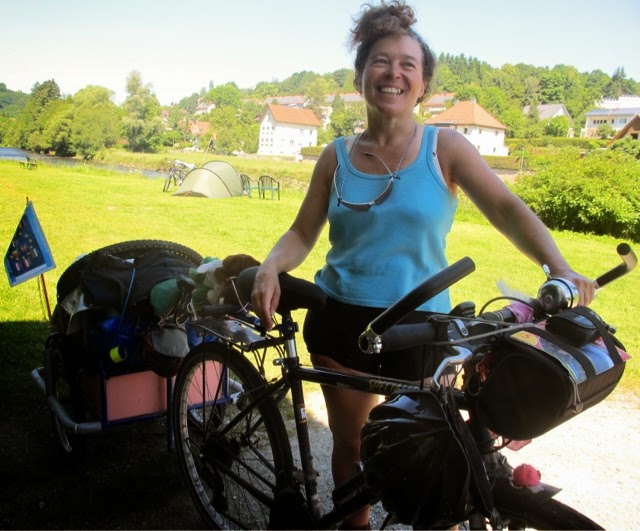 French solo cyclist Maud at Passau. Her trailer is called Froggie and
she is carrying several cuddly animals to give to children in Romania.

We've already chatted at length to an Aussie/Kiwi couple (Chris and Margaret from Oamaru) and to a solo Frenchwoman (Maud) who has been collecting snails off the bike path and dousing them in water for five days to cleanse them before cooking them with garlic, butter and herbs. She's towing a trailer called Froggie, and like us is bound for the Black Sea. Maud spent a year in New Zealand and summed it up this way - beautiful, a good place to retire to and have a garden. As for us men - we are "gumboot men", which I took to mean lacking in sophistication. 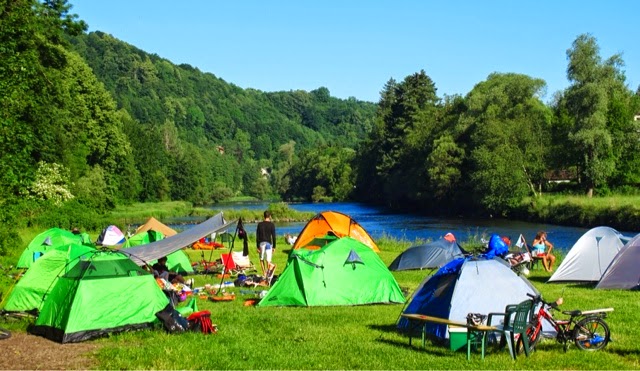 Fellow cyclists in the campground at Passau.

If the cycling sounds fun and idyllic it is - Germany must be one of the easiest countries in the world to tour by bike. But this is just the start. The weather will get hotter and we expect the EV6 will deteriorate the further east we go. After that, who knows what will lie ahead. 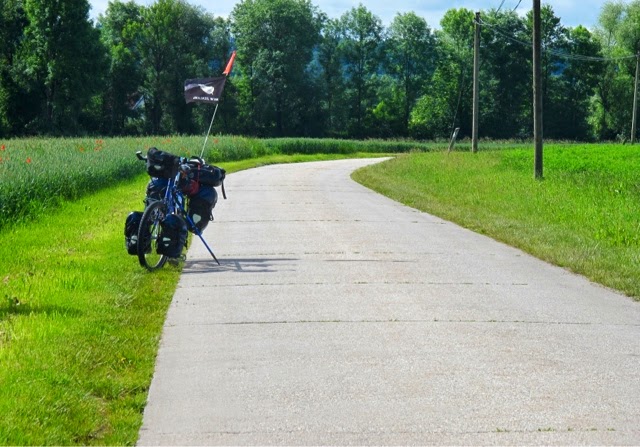 Quotable Quotes from Judy the Stoker
"My bum's got bother. My 18 month golden run appears to be over."

Posted by Mike Brockie and Judy Yeoman at 04:18