Current Location: Chumphon, Thailand
In case you missed the last blog: Mike the Captain has lost 10.7 kilos since setting out. Now weighs 75.8 kg. Judy is keeping her weight to herself, but is trending down.

“Oh no, I’ve put lip balm all over my arms instead of moisturiser. I should be taken out and shot,” Judy the Stoker, unwell and grumpy with herself.
The bus was one of those local ones - familiar to backpackers all over Asia. Garishly decorated, it ground its way dutifully north stopping from time to time to pick up and deposit passengers and their cargo which included sacks of vegetables and two durian fruit which were dumped on the floor near us. They gave off that heavy, sickly smell that’s enough to turn the stomachs of most Europeans.

The bike was jammed near the rear exit, making it difficult for passengers to use the door. Judy's sore throat was no better, so she tried to sleep on a bench seat but a youngster from the back row kept scrambling past her to pass a cellphone between two adults. He was wearing a dark green military style shirt with a picture of a pistol and the words, “The Angry Amputees”  and “Infidents” (sic) stamped across it.

He was the oldest of four dark-skinned, beautiful children who gazed at us constantly until one by one they fell asleep, and lay in a tangled heap against one another.
While Judy dozed, I tried to enjoy the novelty of riding a bus. At 70 kph, the towns and countryside flashed by but it was a dull landscape and we weren’t missing much by not being on the bike.

The interior of the bus was multi-coloured, the ceiling like a rainbow on speed. Oscillating fans kept the air moving when we stopped, and underway the breeze blew through wide open windows. Loud speakers were spaced at regular intervals in the overhead luggage racks and lights - looking like car tail lights but not only orange and red but green and yellow and blue - gave the impression that the bus might have another life as a disco or karaoke bar. At the front of the bus, a picture of the Thai King and Queen showed them on what appeared to be a balcony somewhere, waving to an unseen crowd. Nearby, the driver’s spare keys dangled from a row of hooks stationed in front of a fluorescent lime sunshade – tasteful.

Another Option when it gets Too Tough

We arrived in Chumphon, tired, stiff and in need of toilet stops, but reassured in the knowledge that if necessary we can squeeze the bike onto a bus. It’s not something we  want to do, but the mountain country of north Vietnam and China’s Yunnan Province lie in the distance. If the going gets too tough, we know what we can do. 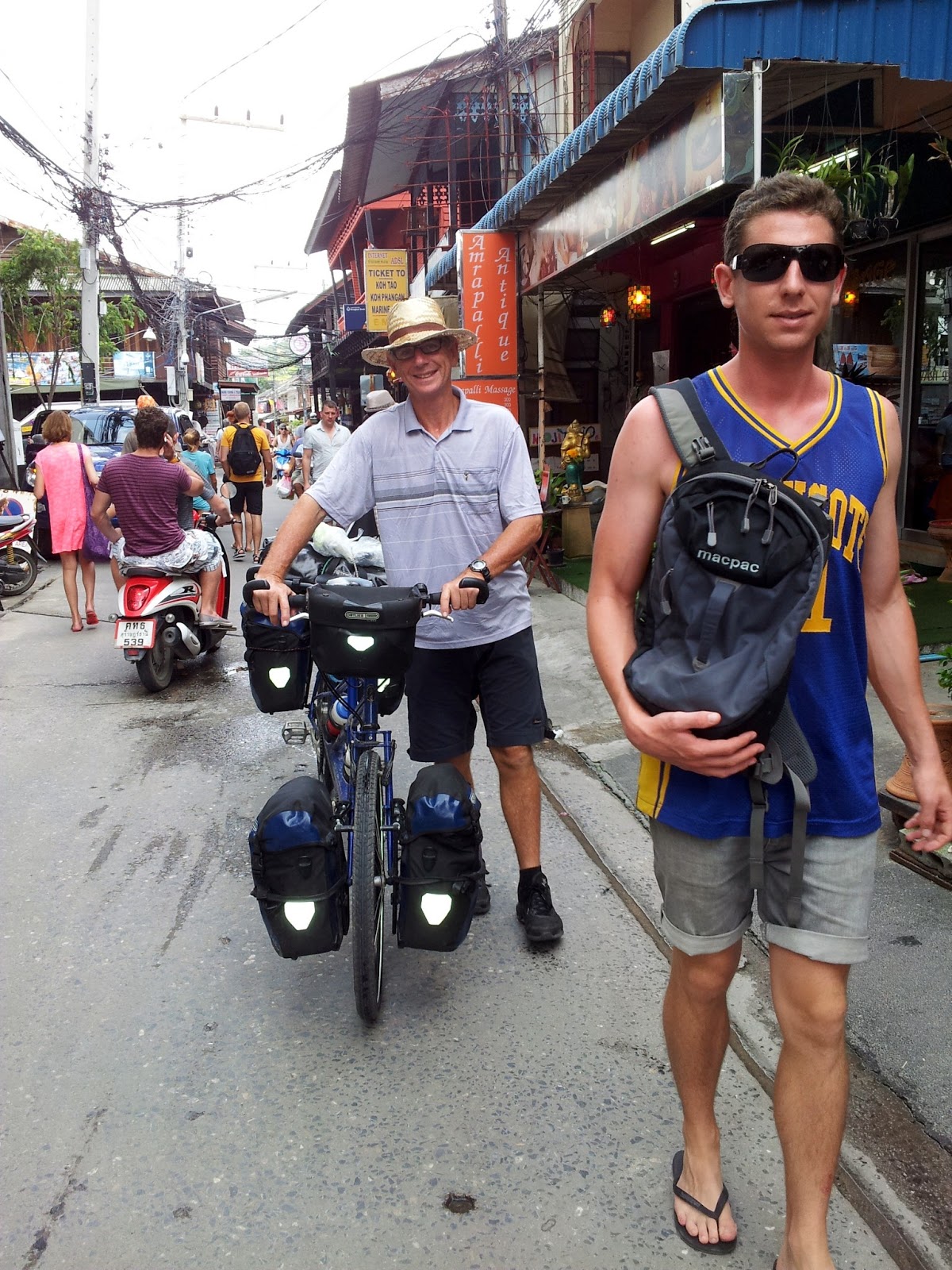 Son Sam, 27, has tossed in his job in Sydney and taken to the road, and by co-incidence was on the Thai "party" island of Ko Pha Ngan as we were on neighbouring Ko Samui. We managed to get together for one day - all too brief - before he and us went our separate directions.
I must admit to a tear in the eye as I farewelled him onto a ferry back to Ko Pha Ngan. He's grown up in the years he's been in Australia and there's an awful lot of catching up to be done.
He has a standing invitation to join us cycling if he wishes, but for the moment he's determined to go it alone. All the best Sam, take care out there.

Sam's writing a blog which is already putting us to shame - he has a nice style. It's at: /http://intheplanetjupiter.wordpress.com/


Posted by Mike Brockie and Judy Yeoman at 21:52