TANDOIDS
Current Location: Olympia, Greece
Distance Travelled: 4,629 km
Bottoms' Status: Judy 6.5 out of 10 (10 is bliss) Mike 7.0. We have both had too much time off the bike.
State of the Chains: Replaced once (in Germany), almost due again.
Best cheese of the trip: Feta here in Greece.
Best dessert of the trip: Baklava here in Greece.
Current Favourite Drink: Mike Ouzo with ice. Judy ice-cold beer. 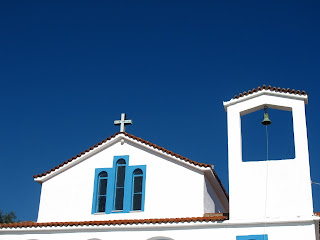 Click, click, rattle, click. The worry beads are being fingered across Greece. It happened when we stopped for coffee today, and it happened last night as we watched TV in the bar at our campground.  Gordon Ramsey was sorting out someone’s restaurant in English, with Greek subtitles. We were quite enjoying it, but as news time came round the barman switched channels, the Greek locals started watching and the beads resumed clicking.


Within seconds Angela Merkel was on screen looking grim-faced and scolding, the German headmistress whose patience with Greece is running out. There were a lot of other faces we didn’t recognise and the story was all Greek to us, but there was little doubting the message – it was more of the same - Greece has to take its medicine if it wants the next installment of bailout funds.
As cyclists we’re not immune to Greece’s troubles. A few days ago, the country’s two biggest unions encouraged their members to strike and there was no guarantee our ferry would operate. We switched the day of our trip from Corfu to Patras, on the Peloponnese (peninsula) to avoid being stranded overnight with nowhere to sleep. One of the museums here in Olympia, birthplace of the modern Olympics, has been closed as a cost saving measure.
﻿﻿﻿﻿﻿﻿﻿﻿﻿﻿﻿﻿﻿
We’re lucky, as tourists we can breeze in and out of the country but we can’t help feeling sorry for Greece. It’s people are warm and welcoming, but nearly one in four of them is unemployed. They are not saying much to us about the country’s economic troubles – just an acknowledgement now and again and the rattle of those worry beads.
﻿﻿﻿﻿﻿﻿﻿﻿﻿﻿﻿﻿Our route now is through the Peloponnese to Athens, from where we hope to fly to Kuala Lumpur in Malaysia – the end of leg one of our bike ride and the start of leg two.


For this part of our ride, we have a valuable guide in a man called Edward Enfield, the father of the British comedian Harry Enfield. At the age of 69, Enfield snr flew to Athens and undertook a month long ride around the Peloponnese. His book, Greece on My Wheels, is by far the best source of information we’ve found for anyone silly enough to ride a bike here – it’s mountainous and this year at least, the temperatures are way up in the mid-30s. We have decided to follow his route, not slavishly, but where we can in the time available.

So far it has led us to a Frankish castle at Kastro – unfortunately the castle was closed (possibly another cost saving measure)  but we walked around the outside of it and chatted to two fire spotters who were stationed high up on the hill looking for sudden blazes in the continuing dry weather.


On Enfield snr’s recommendation we pedalled the 70 km to Olympia where today we visited the archaeological site and walked through the tunnel used by the athletes to reach the stadium when the games started. We didn’t run the length of the stadium (it was already too hot for us at 10 am) but others did.
﻿

Enfield’s journey took him south and eventually to the Mani – an area of particularly rugged beauty. It’s where we hope to go too.
Posted by Mike Brockie and Judy Yeoman at 07:26