Apologies for this post. Computer/me/website seem to have had a meltdown. Please scroll down where there are gaps. Afraid we can't seem to get captions onto the pictures, but we do have a MAP!
TANDOIDS
Distance travelled: 5,141 km
Maximum speed: 63.2 kph
Highest climb in one day: 1,174 metres
Worst matches: Found in Greece, won't ignite, when they do they flare up and go out immediately.
﻿﻿﻿﻿

View CYCLING THE PELOPONNESE in a larger map

Ok, so here are some words to toy with – ones that have sprung to our minds as we’ve loosely circumnavigated the Peloponnese, Greece, on our tandem - switchback roads, swooping downhills, olive trees to the water, welcoming locals, pretty beaches, gorgeous churches, ancient sites, spaghetti western countryside filled with gorges and orange bluffs missing only John Wayne and a horde of Red Indians. And then there’s the rubbish (as we’ve mentioned before) and the dogs. Both are everywhere, but the latter are almost always restrained. Loud and noisy, they can startle, but cyclists are seldom at risk here.
﻿﻿﻿﻿﻿﻿﻿﻿
﻿﻿﻿﻿

We’ve spent almost four weeks here, covering the best part of 700 km and it’s probably been the most enjoyable part of our trip since setting out from England six months ago. ﻿﻿﻿﻿﻿ 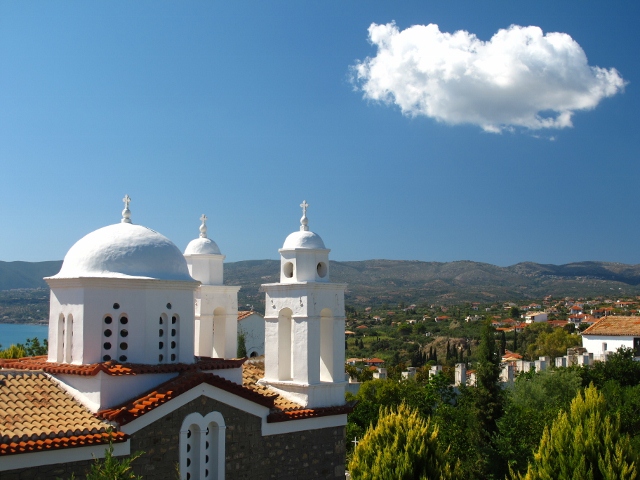 While the distances here have been short, the riding has been tough at times – the toughest day was setting out at just above sea level from Skala and reaching nearly 1,200 metres by mid-afternoon as we headed north east to Leonidio. 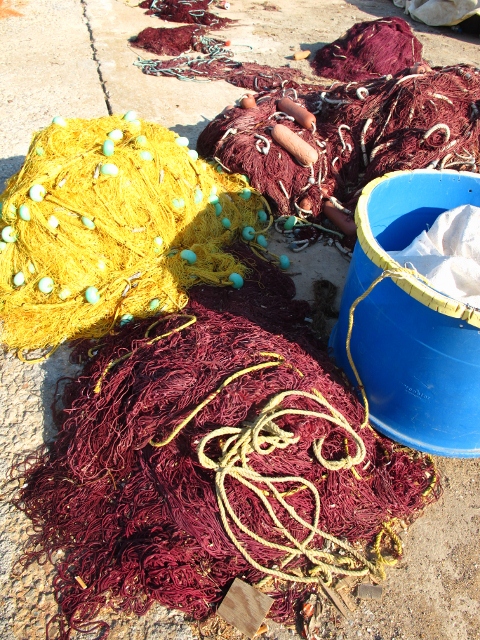 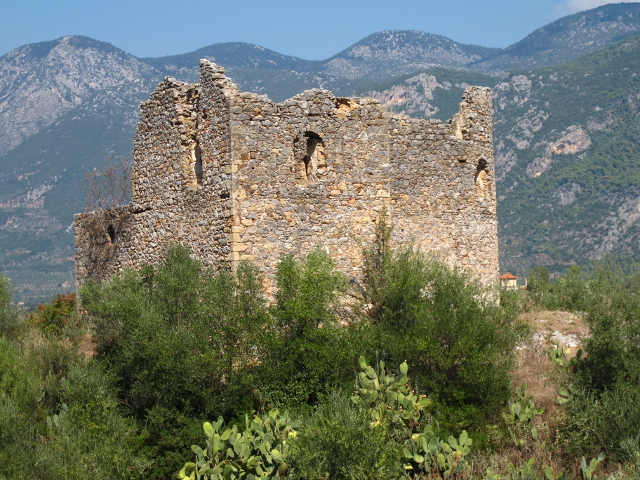 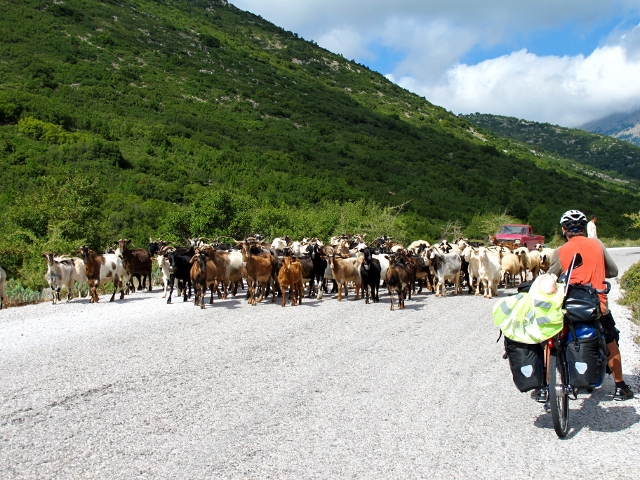 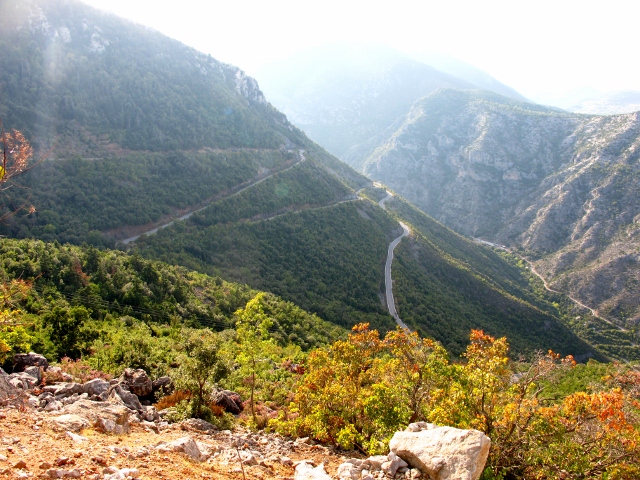 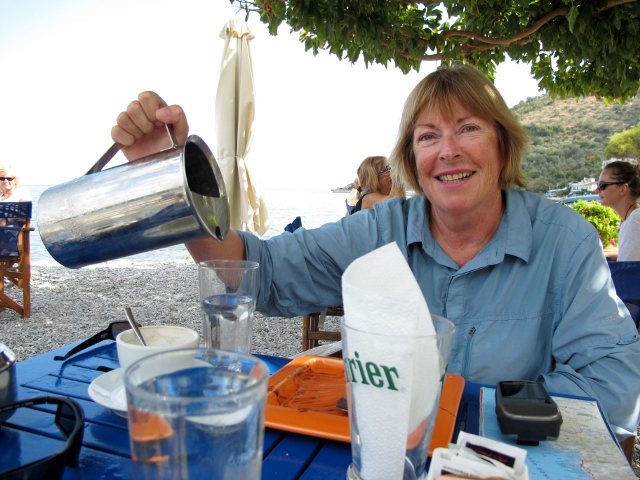 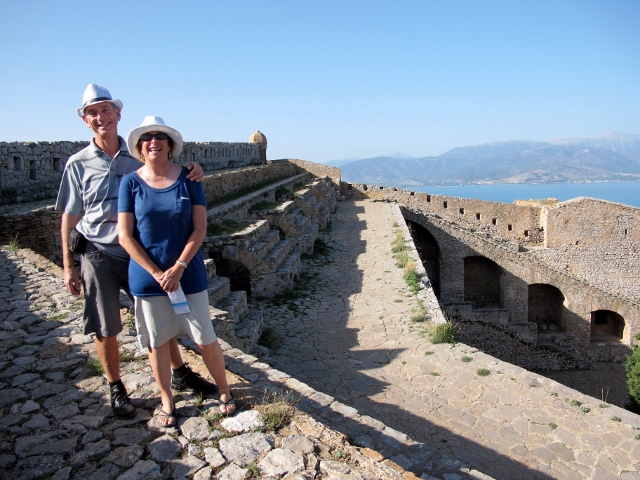 But the descent was magnificent – first to the little town of Kosmas where we sat shivering in the mountain air as we cupped our hands around our coffees in an effort to warm ourselves. We added extra layers of clothes and set off again – plummeting downhill as fast as we dared, the two of us acting in unison as we swung through the bends and halted occasionally to survey that spaghetti western countryside and let the brakes cool.
We reached Leonidio in the late afternoon and spent some time finding a bed for the night – the only place open was the Hotel Costa Rina which according to Judy, looked like something from the eastern bloc, circa 1970.  At a fast food place we ate a meal described by the waitress as “vari-iss”. That was a new one on us and we quizzed her – sausage, kebab, pita, salad etc. It was only after we’d ordered that Judy noticed the menu in English on the wall – included was a dish called “various”. As we ate, a thunderstorm and lightning raged outside, but it was over by the time we came to walk back to our hotel in the dark. Just another day in fantastic cycling country.

As a guidebook we’ve used “Greece on My Wheels” by Edward Enfield (it’s available on Kindle for cyclists travelling light). It was published many years ago, but is still relevant with lots of information about the places he visited and the history of the region.

For other cyclists contemplating the Peloponnese – do it but be prepared for plenty of hills. The gradients generally aren’t too bad, but climbs of 3-400 metres crop up regularly. If travelling in the same month as us (October) be aware that many campgrounds will be in the process of closing – the middle of the month seems to be a popular time to shut up shop. However, there are plenty of rooms to let starting from E25 and hotels from about E40. Standards fluctuate so it’s worth taking the time to look around and be prepared to bargain. The weather this October has been superb – lots of sun with day time temps in the high 20s and low 30s. The occasional thunderstorm has been shortlived. With the summer season over, traffic on the roads has been mostly light and we’ve felt pretty safe despite some appalling driving.

Tomorrow we cross the Corinth Canal and take what’s called the Old National Road to Athens.

Posted by Mike Brockie and Judy Yeoman at 03:57