We know his name is Jim, but without being nosy it was hard to find out anything else about the man camped on top of us in Monterey.
We know his name is Jim because the camp ranger at Vets Memorial Park high on a hill above the town addressed him that way. At the time, Jim didn’t respond – he was in a dead drunk.
He’d pitched his tent almost on top of us – too close, it felt like an invasion of our personal space. We grumped to each other but there wasn’t much we could do except move.
The ranger’s attitude to Jim was kindly, you could tell by the way he called “Jim” several times and then, without a response, wrote out a new campsite registration for him and left him to it. Given that the campsite was alongside some sort of military establishment, and bore the name Veterans we figured Jim himself was probably a vet of one or another of America’s wars.
That day we took the ranger’s advice and cycled to Carmel – the snobby enclave which once had Clint Eastwood as its mayor.
It was a public holiday – Labor Day – and the streets were packed with well-heeled tourists, the women in white or cream outfits, the men with soft hands and perfectly groomed hair. Ocean Avenue was lined with smart retail shops and art galleries filled with conservative seascapes or gaudy versions that appeared painted for the benefit of interior designers. We wandered with the bike, trying not to gouge people’s shins with the pedals as we pushed through the crowds, and finally gave up trying to have coffee – the restaurants looked out of our league and were filled with groups enjoying their second or third bottles of chardonnay.
We felt out of place and I grew increasingly irritable. As usual, it was Judy who put her finger on it.
“You know what,” she said. “It’s the contrast between those people working in the fields we saw cycling into Monterey and the people here. So little money there, so much here.”
And that’s exactly it. Monterey County’s largest industry is agriculture. The average farm worker’s salary is less than $15,000 a year, and according to the union movement, more than a quarter of Monterey children live in poverty.
We’ve seen homeless - like Jim – everywhere on the Pacific West Coast. It’s easy to dismiss them as losers or no-hopers, but the one or two we have met have seemed genuinely nice people who for a variety of reasons are drifting from campground to campground – doing their best to twist the rules which say you can’t stop at one campsite for more than one or two or maybe three nights.
After out visit to Carmel, we cycled back to Monterey and spent the afternoon at its aquarium. It’s a spectacular showpiece and comes with an environmentally friendly message. The fish themselves are wonderfully uncomplicated and it was a relief to be able to spend a few hours enjoying some harmless fun.
Back at our campground on the top of the hill, Jim refused to acknowledge us apart from the briefest of grunts before he climbed onto his bike and vanished into the evening.

During the night I got up to answer the call of nature. I crossed the path outside our tent and headed for the bushes on the other side and was startled suddenly by a noise. My headlamp picked up a bundle of clothing. There was a figure lying in the open, fast asleep and snoring.
I went in the opposite direction and returned to bed. A couple of hours later we were disturbed by the sound of a bicycle bouncing over the tree roots beside our tent. It wasn’t someone stealing the tandem, it was Jim who had aroused from his slumbers and was making for his tent. Within moments he was asleep and snoring again, but we were left sleepless - confounded by this country where so many have so much, but so many others are left out in the cold.

The message on Facebook was short and to the point. An old TV3 colleague and friend, Suzanne Newman (nee Baker) was holidaying in the U.S. with her husband.  After time in New York and Florida, they were coming to California, where Suzanne knew we were cycling. The message was seven days old by the time Judy and I found a wifi connection and the time to catch up on our correspondence.
I hammered out a quick response – saying we were still on the road and let’s keep in touch, and left it at that.
Imagine our surprise when two hours later, a black Mustang convertible waved us down on Highway One on Big Sur and a woman climbed out.
We chatted, met Suzanne’s husband Gavin and then a bit later regrouped and picnicked in the sunshine overlooking the sea, an extinct volcano and the 120-year-old Point Sur Lighthouse.
It is 15 years since Suzanne left TV3 in Auckland. She now lives in Melbourne. We had a lovely time catching up on all that’s happened in the intervening years. And we all agreed that while Facebook can be time consuming and distracting, it is also a fantastic way to stay in touch.

“The face of the earth as the Creator intended it to look” – Author Henry Miller writing about Big Sur.
If there is one place on the Pacific Coast Highway people have raved about, it is Big Sur. The 90-mile stretch of coastline about 300 miles north of Los Angeles has a worldwide reputation for its wild beauty. And it’s justified.
The views of the Pacific are spectacular – there are miles of golden sands, long beaches, cosy coves and rocky headlands. Cycling it is an up and down affair – hilly and with lots of bends but perfectly rideable so long as you don’t mind all the vehicles – most of them driven by other tourists who duck in and out of the “turnouts” to take photos.
If there is the usual tailwind, as happened for us, it can be a real blast – the uphills seem to flatten and even on the flat we were clocking over 40 kilometres an hour with little or even no effort at times. But the same gusts can be tricky when they blast you sideways on some of the exposed headands.
There are some long stretches with limited opportunities to top up on food and water so it pays to be prepared. And access to the beaches is not easy. Much of the land is private property and signs warn the public against trespassing. Fortunately there are a number of State Parks and U.S. Forest Service beaches which are open to the public, though a hike down a trail is usually required.


That aside, Big Sur is spectacular touring country, whether by bike, car or motorcycle. 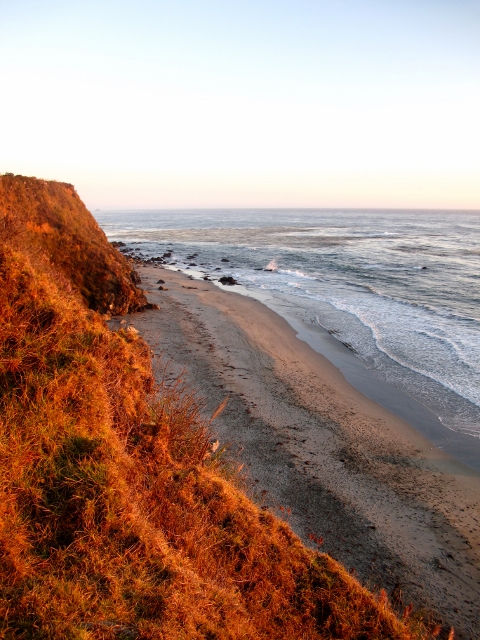 Posted by Mike Brockie and Judy Yeoman at 11:44