I walked on the banks of the tincan banana dock and
sat down under the huge shade of a Southern
Pacific locomotive to look at the sunset over the
box house hills and cry.
Jack Kerouac sat beside me on a busted rusty iron
pole, companion, we thought the same thoughts
of the soul, bleak and blue and sad-eyed,
surrounded by the gnarled steel roots of trees of
machinery.
The oily water on the river mirrored the red sky, sun
sank on top of final Frisco peaks, no fish in that
stream, no hermit in those mounts, just ourselves
rheumy-eyed and hungover like old bums
on the riverbank, tired and wily.
Extract from Sunflower Sutra by Allen Ginsberg
Click the link below to hear Ginsberg read it:
https://www.youtube.com/watch?v=8A_tDB7t5eg

It must have been 1970 and in Auckland I was pretty cool. I knew this because I had the clothes to prove it. Flower power and Haight Ashbury were almost over on America's West Coast but the influence of the Beat Poets was still strong.

The outfit was bought for work – bottle green trousers, high waisted and with flares. They were teamed with a paisley shirt with a paisley tie which did not match. There was meant to be a bottle green jacket too, but my pay packet would not stretch that far. When I went back a week later, bottle green had sold out and I had to settle for mustard – let’s make that puke. I had platform shoes and my hair was scruffily long.  My beard was reminiscent of a dog with mange.

I wore the outfit to court and joined the other reporters on the press bench. As the court stood for the entry of the magistrate he ran a jaundiced eye over the room. Finally his gaze settled on me, and with the assuredness of a man in charge of his own court he addressed everyone. “I see we have been joined by a Spanish waiter today.” The courtroom erupted in laughter – except for me.

It was about this time that I was mixing with excellent company – a couple of anarchic colleagues who had introduced me to the poetry of Allen Ginsberg, Lawrence Ferlinghetti, Gregory Corso and others. And I had also stumbled across Jack Kerouac’s novel, "On the Road" (also, now a 2012 film directed by Walter Salles).

I’d taken to carrying a copy of Ginsberg’s poems in my pocket, ever hopeful that I would find an audience (especially one with a wistful and sympathetic female) who would be prepared to listen to the work of this remarkable man – a leading member of the Beat Generation. I don’t think I ever found that audience and it was probably just as well – when it came to reading in public I would have been much to shy, and anyway to be really, really cool you had to be writing and reading your own poems.


All this is a long way of explaining that I have been fan of the Beat Generation for more than 40 years. Now in San Francisco, I have had a chance to revisit their lives and their work.

The first stop was an exhibition of photographs by Ginsberg, currently running at the Contemporary Jewish Museum. Most of the pictures were shot on a cheap camera he bought at a pawn shop, and show the young writers that defined a generation.
Next was City Lights Bookstore, http://www.citylights.com/ co-founded by Ferlinghetti in 1953, and still in its original location on Columbus Ave, North Beach. Inside are three floors of the kind of books you will never find in the chain operated bookshops of today - with titles such as “Counterculture Colophon” and “National Insecurity - The Cost of American Militarism”. And then there was the intriguing one called, “Why Marx was Right”.
While Judy searched for a travel guide downstairs (the guidebook selection is somewhat limited) I climbed the creaking stairs to the top floor and there it was – a whole room devoted to poetry.

Now – two days later – we’ve made a second trip to North Beach to visit more literary landmarks. I enticed Judy with the promise of coffee at Caffe Trieste, where Francis Ford Coppola is said to have drafted “The Godfather”. But I lost her along the way, which gave me a great opportunity to return to City Lights. Then it was on something called the Beat Museum, a decidedly tacky assortment of not very much – books, photos and a few dusty items of memorabilia, for example Ginsberg’s Olivetti typewriter.

Later we visited Kerouac’s love shack, where he holed up with Neal and Carolyn Cassady in the early 50s as he hammered out the first version of “On the Road”. Jack and Carolyn became lovers, until she kicked out both him and Neal (Kerouac used Neal as the central character in his novel “On the Road”). 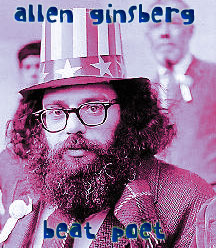 These days the old haunts have been gentrified, and tourists on organised walking tours are guided around landmarks, including nearby Chinatown. But poetry is still in the air - with street readings and City Lights marking its 60th anniversary with a number of special events. It’s a reflection of the influence that Ginsberg et al have had on American culture, poetry and music, through the decades.
Posted by Mike Brockie and Judy Yeoman at 17:05