Chop or dice all the vegetables
Spray canola oil in pot, add water and boil enough pasta for two hungry cyclists – drain
Put pasta in two bowls and cover with towel.
In pot, add canola oil and fry onion and shallots, then add capsicum, courgette and  tomatoes. Cook until greens begin to soften. Add tuna and heat through.
Put hot ingredients over the pasta and stir in well.
Top with parmesan if desired and eat with fresh bread and bottle of red wine.

The Joy of Comfort Food

“The coldest winter I ever spent, was a summer in San Francisco.” Mark Twain.
Twain clearly never made it to Brookings, Oregon. It’s summer here, north of San Francisco but a chill wind won’t leave us alone. 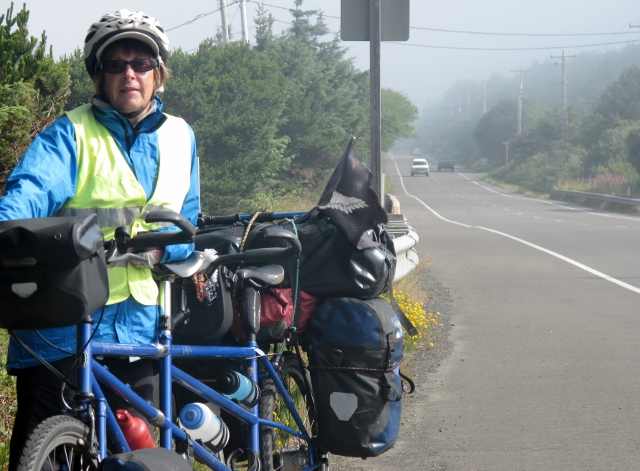 It sneaks down our collars as we ride, our hands are always cold even with gloves and we ride with an extra layer on top. On the hills we sweat, on the downhills the sweat chills us until we start to climb again. The only relief is in the afternoons when usually the fog clears, the sun comes out and we find shelter from the wind.
As a result of this weather, suddenly comfort food is in. Pasta, rice, noodles and soup are old favourites, but now we’ve been introduced to a new delight.
Among the dozens of cyclists we’ve met recently were Alan and his teenage son Eric – travelling as part of a group of teachers from Victorville, southern California. One evening father and son were tucking into mashed potato with tuna mixed in – we eyed it with envy until eventually Alan presented us with a packet of Idahoian Butter Fried Instant Potatoes. The next evening Judy poured boiling water into the white flakes, added a packet of tuna and a tin of peas - ”covering off three food groups”, she said – and dinner was served. On a cold night it was perfect.

Food is one of the joys of cycling – it doesn’t need to be anything flash, quantity and calories are all that matter.

We have been living beside the Pacific for days now – by day we look seawards from vantage points like Cape Foulweather, (named by Captain Cook who sighted it in 1778) where we spotted a grey whale. At night we are lulled to sleep by the sound of the surf.
These are easy days and we are enjoying them. Our route south down the Pacific Coast Highway remains spectacular and we have plenty of time, which means we can keep our mileages low – our record so far is a daily run of 25 miles or 40 km.
To cap it off we are meeting some wonderful people, and a few dodgy ones including two knife wielding young men from Wyoming.

We found them sitting on the pavement beside our tandem when we returned from shopping in a supermarket at Waldport. My first concern was the bike, but a surreptitious check revealed everything was at it should be. The pair sitting almost on top of it had some cardboard from a recycling depot and asked if they could borrow “a pin”.

Once we had established it wasn’t a pin but a pen they wanted, we handed one over and one of them laboriously scratched out the words “WE ARE GOOD PEOPLE” on the cardboard. He pulled out a vicious looking, curved knife and cut his placard to the size he wanted while his younger brother did his own sign,”Evrey (sic) $ counts”, his one read after he had asked how to spell the word “count".He too pulled out a knife and when we asked why they carried them they reassured us they would never use them against anyone. “You’re not allowed to carry concealed weapons back in Wyoming”, one said. They were drifting, making a little money by catching crabs on the coast and undercutting the prices charged by the supermarkets. It seemed an aimless life and we weren’t convinced they were the “good people” they claimed to be. We got our pen back, and left.

That encounter was just one of at least three we’ve had with people living on the fringes, and we are not finding anything romantic or adventurous about their lives. These are not the characters of Kerouac’s “On the Road” burning with a passion for life and new experiences. They are lost souls for whom hope of a decent future has vanished.
Fortunately those encounters have been overshadowed by many others including that one with Alan and Eric of the mashed potato and the others in their group – they called themselves the “Wild Squirrels” and were riding south like us.
We also met Kelly, just back from Guatemala where she worked with the U.S. Peace Corp helping local people grow their own vegetables and improve their diets. She was young and bursting with energy and eventually told us she couldn’t wait until her “sweetie” arrived from Melbourne.
We’ve met many other cyclists recently and enjoyed their company, but perhaps none more so than 20-year-old Shirine, cycling the Pacific Coast to test her equipment before setting off on what she hopes will be a three year world tour. We put her in the category of “Most Likely to Succeed”. When we asked her why she was doing it, she said one of the reasons was to try to prove the goodness of humanity and that a young, single woman could cycle all that way without coming to harm. To check out how she’s doing, her blog is at:
www.awanderingphoto.wordpress.com
Quotable Quote from John, Cyclist from Portland, met at Beachside State Park, Oregon: “Sometimes this feels just one up from being a homeless person.”

Posted by Mike Brockie and Judy Yeoman at 11:33