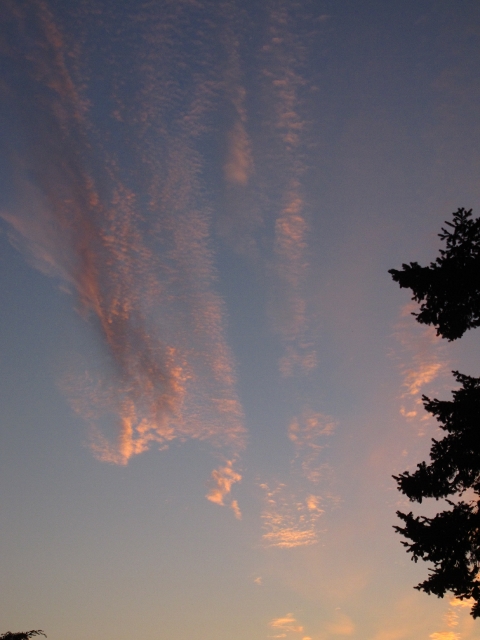 Blue, blue skies, equally blue seas, fir trees that reach for the stars above our tent, mountains on the horizon and the rush of water from streams we cycle past – these are some of the sights and sounds of the Pacific North West. If it seems like something out of a brochure by the Washington State Tourist Office that’s because it is hard to fault this region as a cycling destination. 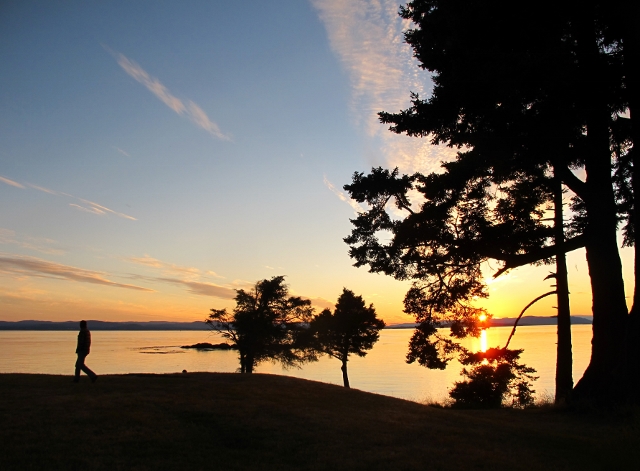 There are hills to ride up but they are rolling rather than steep. There are lots of campsites ranging from the basic (“primitive” is the word used to describe them here) to much more expensive ones with all the amenities. The distances between food and coffee stops are within the range of most cyclists. And all the information riders could want about the region and the route south to Oregon and California is handily contained in one book – “Bicycling the Pacific Coast” by Vicky Spring and Tom Kirkendall. Cyclists don’t even have to think.

We have discovered some spectacular campsites – our favourite so far is San Juan County Park, on San Juan Island. It is on a grassy hillside providing 180 degree views west across the water to Canada’s Vancouver Island, and is a great spot to watch the sun go down. Like many of the state parks it has a hiker/biker area – set aside for those who arrive by foot, bicycle or sometimes kayak. The fees for these sites, which don’t have to be booked in advance, vary from US$10 to US$20 for the two of us. Sometimes they have showers (an extra 0.50c each) but often they don’t – their most serious omission in our minds. But compare that with the overnight fee of US$40.00 plus that many commercial campgrounds charge.

Two drawbacks not always mentioned in the region's tourist brochures are the weather and the mosquitoes. The latter are ferocious, emerging around dusk but thankfully gone by morning. It takes two layers of clothing and 80 % Deet to keep them away.

When there isn’t a sky full of blue it is usually raining - up to 140 inches (3,556 mm) each year on what is called the Peninsula Route and 45 inches (1,143 mm) on the Inland Route. But now, June and July, is the perfect time to be heading south as the weather warms up. After some rain in the first fortnight, we have had brilliant sunny weather lately with day time temperatures in the mid-80s F (around 30 degrees C).
To cap it all off, our amended budget seems to be working after a shaky start. We arrived on San Juan Island late in the day by ferry from the Canadian town of Sidney. We rode to the nearest
campground – commercially operated Lakedale Resort - where we were charged US$42.54. Given the time of day we had no choice, but the fee was enough to swallow up most of our daily budget of $US50.00. On top of that, our site was a hiker/biker one tucked in the forest with little light, a long walk for water and a cycle ride to the showers.

We went to bed that night feeling low and concerned about how we would make our money last. The next morning we held an urgent meeting of the 2xtandem planning committee and resolved to increase our daily budget to $US70.00 a day. More than a week later we realise we panicked, and our original US$50.00  is manageable, although we are bound to take some hits in the big cities of  California.
But that’s a long way down the road. In the meantime we are enjoying the blue skies of sunny Washington State.

Footnote: Today (Sunday 7 July) we  cycled across a 4 mile (7 km) bridge to Astoria and the state of Oregon.

Posted by Mike Brockie and Judy Yeoman at 09:32