﻿ Ping went the spoke, the sound of stainless steel wire giving up was new to us but unmistakeable.We pulled up and sure enough a spoke on the front wheel was broken. I wasn’t sure what to do, but already an audience was gathering and we didn’t feel like being the entertainment. We twisted the spoke around its neighbour, climbed back on the Beast of Bridgwater and pedalled off along a stunningly designed bridge that we were about to learn led to nowhere.

As we pedalled we passed a number of fishermen, dangling their lines off the bridge which stretched into the distance – all 2.3 km of it. At the end, the bridge and road stopped abruptly on the edge of a jungle-clad tropical island. There was no sign of life, but four motorbikes were parked in the dust. An empty drink stall lay abandoned.

﻿﻿
We pushed the tandem into the shade of the drink stall and unloaded some of the bike’s luggage so we could retrieve one of our Kindles. I opened up “The Bike Touring Guide” by Friedel and Andrew Grant and looked up “Fixing a Broken Spoke”. It looked simple enough, so while Judy checked out the surroundings, I untwisted the broken spoke and replaced it – tightening the new one but not too much.

When I looked up, Judy was talking to two men – owners of two of the motorbikes. Why she asked, doesn’t anyone live on the island? “Ghosts,” said one of the men simply. You mean myths, old stories? “Yes,” he said but didn’t seem in a hurry to elaborate. He did tell her the bridge was part of a failed business venture by an oil company, something which appeared to be only partly correct when we checked later. Completed at a reported cost of RM7b in 2005, the Pulau Bunting bridge was going to enable the island to be developed as a tourist resort and stopping off point for yachts sailing between Penang Island to the south and Langkawi Island to the north. For some reason the plan never went ahead and now the bridge is used only for fishing. It is regarded as a complete waste of taxpayers’ money, but little is said publicly in this country where the media is cautious of criticising politicians.


With our wheel repaired for the time being, we retraced our tracks back to the main road, then to a ferry and Langkawi where we have joined the backpacker hordes in search of duty free beers and air conditioned rooms.


Saying Goodbye - Judy the Stoker says:
Leaving Penang was a wrench. Annabel and Suku’s hospitality was so inclusive of neighbours, friends, fellow business owners and us that if we hadn’t gone when we did we would have had no choice but to try to stay permanently under the Malaysia My Second Home visa scheme.
The worst moment came as we cycled from their street and I glanced back - there were our new friends standing with their hands raised in farewell. It brought a lump to my throat. We were on our own again after enjoying weeks of stimulating conversation and lots of laughter. 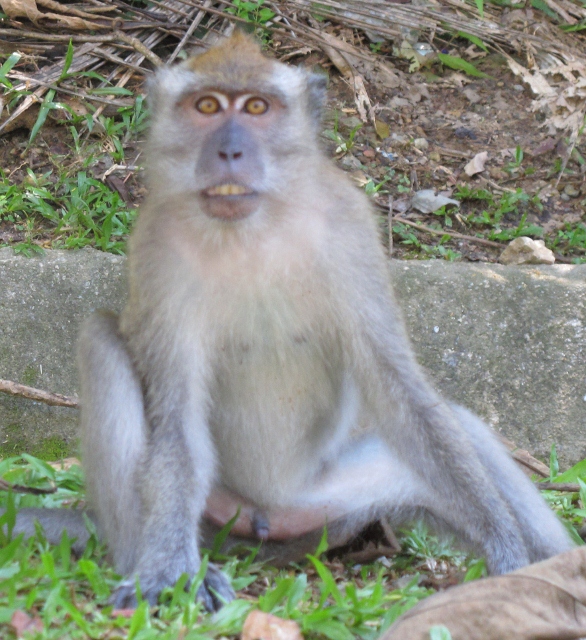 We split the ride from Georgetown to Langkawi into two days – staying at Yan, a quiet coastal resort where Malaysians seem to be the main visitors. From there, we could see the Pulau Bunting bridge in the distance and the next day couldn’t resist turning down a side road to check out the island. Our coastal route was flat, apart from a couple of short steep hills – one of which we walked up. It was just too hot. Traffic - even on the smaller kampung roads - was heavier than we would have liked but still quite manageable.