A Kökup... Or How To Avoid Cycling an Awfully Long Way

Current Location: Bergen, Norway
Distance Cycled This Trip:53km
Current Weather: 29/17 sunny
“Isn’t it great there’s nothing much to see here” - Judy the Stoker.
She’s right. We are enjoying Bergen, Norway’s second city, and the fact that we feel there is NOTHING WE MUST DO. Instead we have been catching up on sleep, walking, people watching and adjusting to Norway the way Norwegians like it. 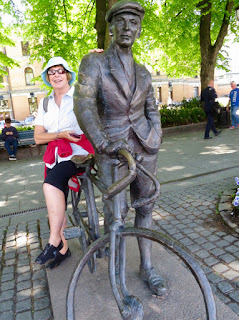 Not a tandem in sight, but Judy
takes an opportunity to pose.

That last bit means Sunday is a day of rest (shops are closed), heavy metal rules, kindergartens place their emphasis on social skills rather than “proper” learning (no school until age six), people tend not to wear hats in the sun (haven’t they heard of skin cancer?), electric and hybrid cars outsell diesel and petrol ones and Norwegian men are far too sensible to give in to the dictates of fashion and wear a stubble. 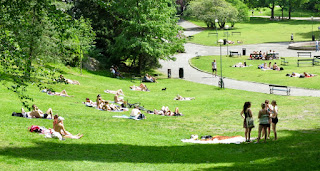 Sunbathing in a Bergen park. Hats are seldom seen.

On top of all that, Norwegian politicians of all persuasions are used to a tradition of consensus and  coalition building.
It all sounds too good to be true but it is. And the sun hasn’t stopped shining since we arrived. 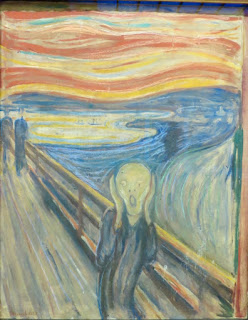 Who hasn’t seen The Scream by Edvard Munch. But the real thing
in Oslo’s National Gallery reinforced the anguish of the desperate
soul. Was it the couple, oblivious, or as Dylan sang, “the sky is on fire.” 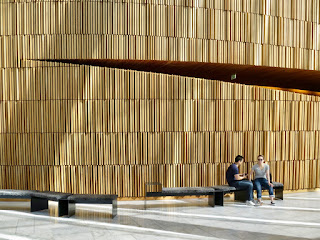 Inside Oslo’s Opera House - impressive enough to
give the Sydney Opera House a run for its money.

The Beast is Shackled
The tandem languishes in a hostel basement in Oslo - the result of stunningly bad planning on my part.
Back in New Zealand with my feet up, a beer in one hand and a map of Europe’s long-distance cycleways spread on my lap, it was easy to be ambitious. I focused on the Eurovelo 7, a 7,000km jaunt that meanders its way south from Nordkapp in the Arctic Circle to Malta.
Somehow I got the idea past Judy. “We could do it over two summers,” she said.
Before Judy changed her mind, I booked an eye wateringly expensive cabin on a ferry to Honningsvag, inside the Arctic Circle. The ship would have plenty of room to take our tandem and I was happy to be setting us up for an epic bike ride. 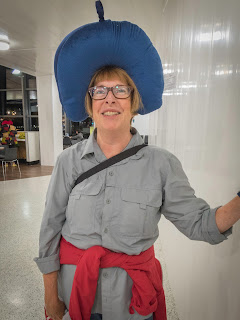 Judy tests her travel pillow before
takeoff from Auckland airport.

The plan started to come undone when Judy read an eBook with the title: Kök and Tvätt - Through Scandanavia on a Tandem. It was by an English couple who had done exactly the ride we were contemplating - down the EV7.
“You know, it sounds terrible," Judy reported back. "It’s 3,000km just to get out of Scandinavia. The EV7 led them all over the place. And all there is to see are trees, with really long distances between places to buy food. It’s really expensive. It rained the whole time. They nearly froze to death. And the mozzies are so bad she had to go to hospital.”
I detected a small problem. While Judy had not declared open revolt, I knew the signs. Besides, the sound of those mozzies was putting me off as well.
Time for a rethink, made trickier knowing I had paid half the fare on the Hurtigruten ferry and in time the company would come chasing me for the other half.
We went for a walk and I hatched a new plan.

Fly to Oslo and leave the tandem there for a couple of weeks. Train to Bergen on Norway's western coast, ferry to the Arctic, fly back to Oslo and start cycling. We would cut out a vast chunk of Scandinavia and escape most of the mozzies.
“Done deal,” said Judy. So here we are in Bergen minus the bike.

“By the way what’s the deal with the weird name of that book - Kök and Tvätt?” I asked Judy.
“Oh that. There were signs on two doors in a Swedish campground. They assumed one was the men’s toilets and the other the women’s. Turned out one was the kitchen and the other the laundry. They thought it was funny. Bit of a Kökupreally.”
GPS George to the Rescue
The Beast has clocked up 53km so far this trip. That’s the distance from Oslo airport to our hostel on the outskirts of the city centre. We made the ride with scratchy eyes and almost hallucinating after the long flight from New Zealand - 17 hours on the Auckland-Dubai leg, a two hour stopover and then hours to Oslo.
It took us four hours to get through the airport formalities, find the bike and reassemble it in a quiet corner of the terminal. We were too knackered to take our usual photo of the assembly process. We changed into our cycling gear, dumped the cardboard boxes behind a rubbish bin and pushed out into the street.
It was 4pm. We hoped desperately that George the GPS (also known as the Bastard Child) would behave himself, and for once he did. My downloaded map of Norway came up after a couple of minutes, the familiar black triangle showed us we were exactly where we knew we were, and a blue line led off into the distance. Oh happy days.
The route was almost entirely on cycle paths - this is Europe after all - but one modest hill threatened to be our undoing as we huffed and puffed our way up. Time was dragging on, but we need not have worried. It was still very much daylight when we rode into our hostel at 9pm.
Posted by Mike Brockie and Judy Yeoman at 05:14