Ghostly Spirits and the Lap of Luxury

"I always knock on the door of my hotel room and wait, asking the spirits for  permission to enter. You never know what has gone before."

The man telling us this was a down to earth Chinese Malaysian, approaching 60, with a background in engineering. He was on his way from head office to a remote corner of the country to help some less senior colleagues celebrate a project completed ahead of target

"The target was a hundred days and they did it in eighty," he told us with a hint of pride over dinner. He was a man grounded in facts and figures and mechanics, not one you would expect to be concerned about ghosts in his hotel room.

"My father taught me to knock first," he said "and I've always done it. Now I have taught my son."

Call him superstitious or whatever, but this trip for us has been one hotel after another and several times I've woken during the night with the feeling that Judy and I were not alone.

Often light leaks in from a street lamp outside our window, or around the ill-fitting door. I see a shape outlined against a wall and for a moment think someone is trying to steal our possessions. Occasionally the shape will move, and I don't relax until I realise it's a curtain or our own laundry swaying in the breeze from the air conditioning unit.

I drift back to sleep with a sense of relief, but the feeling of someone's presence doesn't disappear altogether.

How many other people have slept in this room? Judging by the scuffs on the wall and the way the key jiggles in the door lock, it has had lots of use. What were the circumstances that brought them here? Were they happy occasions or sad ones or, like our friend, straightforward ones - a business trip with perhaps not much emotional baggage.

We will never know.

After dinner last night we returned to our room, a windowless box just off reception. At the door Judy paused.

"Do you think I should knock", she asked quietly.

I nodded. She tapped, waited a few seconds then slid the key into the lock. The room was exactly the way we had left it, but somehow it felt more welcoming. 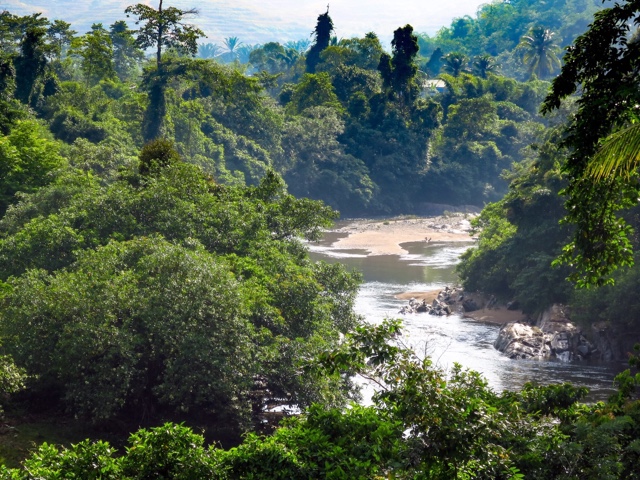 Jungle view as we begin a slow climb upwards on the East West Highway. 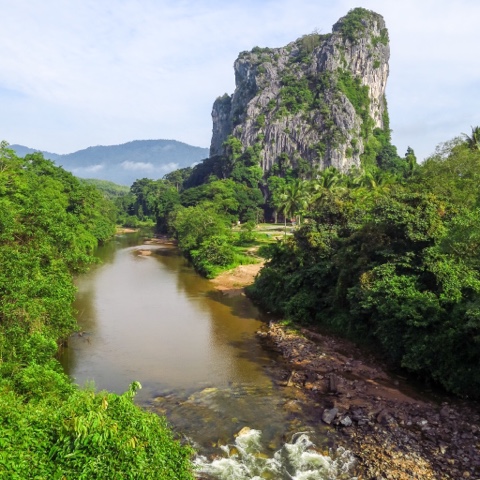 Karst rock towers over Sungai Pergau and jungle about 15km west of Jeli.

"It's the metal rabbit, turbo coming on," yelled Judy as we crested the last little rise into Gerik, an unremarkable town known as an overnight stop for drivers crossing from one coast of Malaysia to the other.

The metal rabbit has become Judy's rallying cry since she was told she was born in the year of the metal rabbit by a Chinese woman. The metal is said to give rabbits more strength, resilience and determination than their lesser relatives.

Just what's needed in a touring cyclist, especially in the past couple of days. 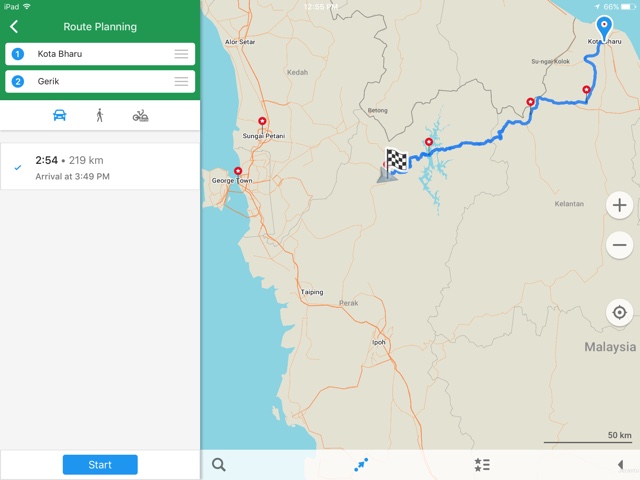 For more detailed maps & stats, copy and paste the links below into your browser.
Kota Bharu to Tanah Merah 49 km
https://connect.garmin.com/modern/activity/1290457359

We have had one particularly tough day - the 90 km from Jeli to Palau Banding, the scene of an artificial lake that supplies water to the Temenggor Power Station. Along the way we rode up a 40 km hill, surely our longest yet. We topped out at over a 1,000 metres and then had a glorious downhill slide for the next 25 km. It was a hot, long and difficult day with occasional relief provided by shade from the jungle and just enough food and fluid stops. 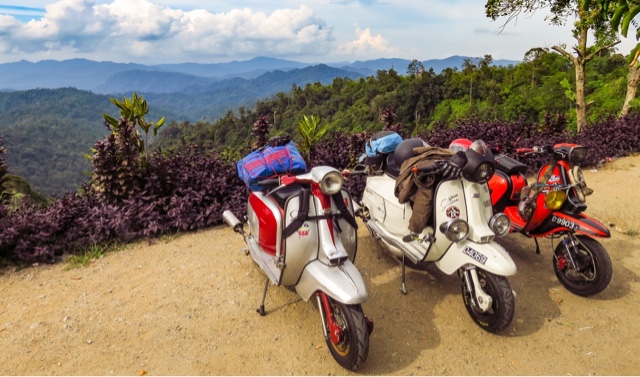 Motor scooters gathered at the high point, over 1,000m up.

When we reached Palau Banding we discovered the hotel where we had hoped to stay was closed.

There was only one alternative - the beautiful but outrageously expensive Belum Rain Forest Resort where the only room left was a deluxe suite garden view for RM680 (NZ$236) a night - more than eight times our usual budget.

It was wonderful. All polished concrete and glass and bamboo, an outside bath (we used it to rinse our clothes) with a fan, bathrobes, slippers and so modern it didn't have a door on the loo. 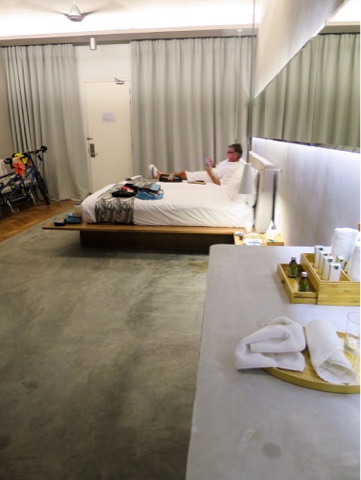 Belum Rain Forest Resort - RM680 a night and so modern there was no door on the loo. Plenty of room for the bike.

We gorged ourselves on the Malay-style buffet (not included in the price), roaming backwards and forwards to the serving tables until one of the staff remarked to Judy that she had eaten a lot.

We collapsed into bed, slept the sleep of the truly exhausted and missed breakfast. We managed to check out by midday, had lunch and left to cycle straight into a solid 8 km climb with the temperature over 40 degrees. Sssssh, keep it to yourself but we even walked briefly a couple of times.

From the top we had another long descent with a road so good we hardly touched the brakes and clocked 60 kph.

Today has been declared a rest day, and from here we will probably give ourselves three leisurely days to the end of the ride in Penang. 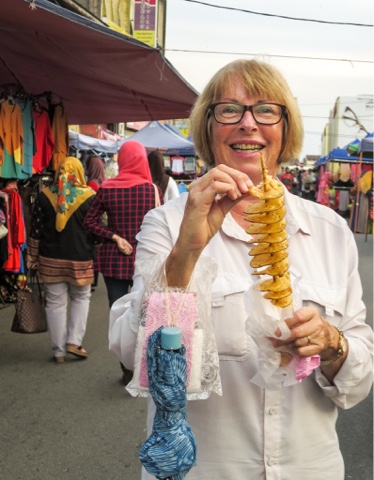 Judy with a goes-on-forever potato chip at the Saturday night market in Tanah Merah. 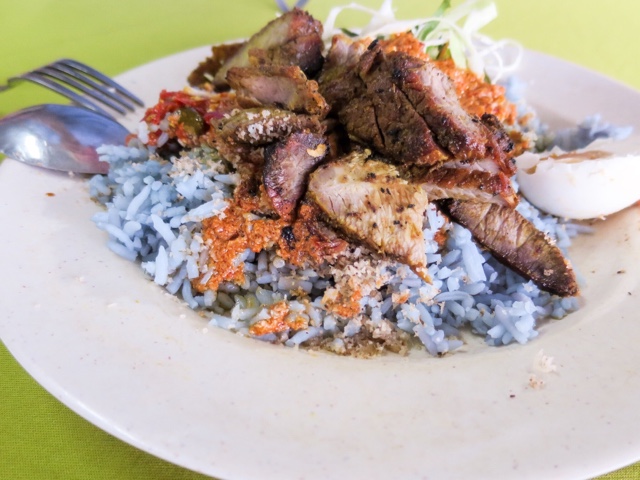 And while we are on food, this is delicious nasi kerabu with its distinctive blue rice. The colouring comes from the petals of butterfly-pea flowers. 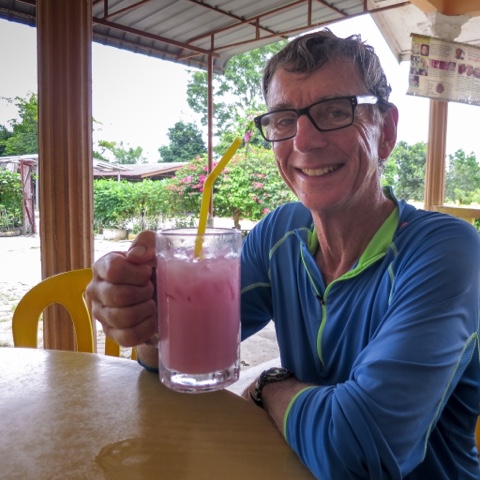 100plus is still my favourite energy drink in Malaysia but this pink concoction comes next. It's called Kuku Bima and comes in a packet from Indonesia. Its ingredients are said to include honey, ginseng and black currents. We found it a bit sweet until we watered it down. 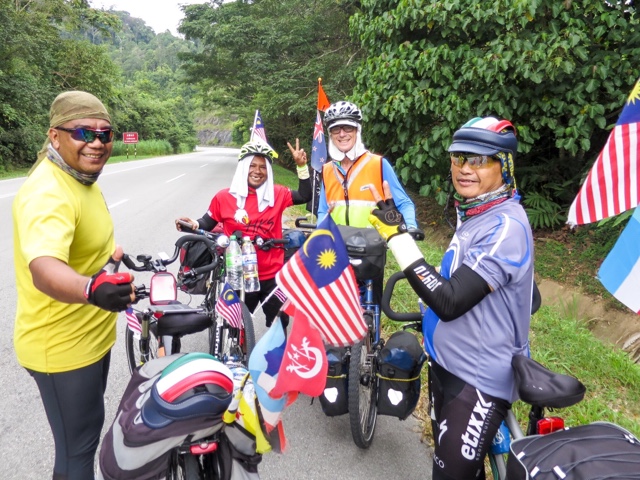 We met these Malaysians cycling the East West Highway in the opposite direction to us. They are only the second group of touring cyclists we have encountered in two months on the road in Malaysia. 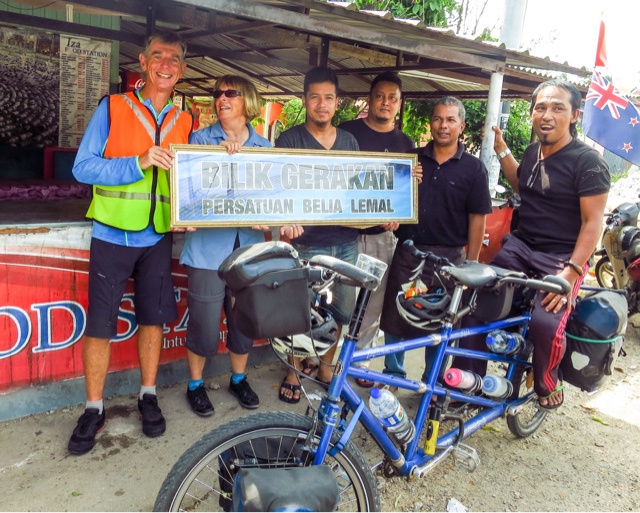 This group wanted to know all about life in NZ and were intrigued to learn that Judy had retained her maiden name after we married. "Women are more equal in New Zealand," one said. Another said he wanted to come to NZ to find a wife. We still haven't figured out what the sign is about.
Posted by Mike Brockie and Judy Yeoman at 16:59