The cobblestones rattled the bike and threatened to chip our teeth as we bounced our way down a 10% hill into the town of Batina, Croatia.  When we arrived, we wondered why we had bothered. 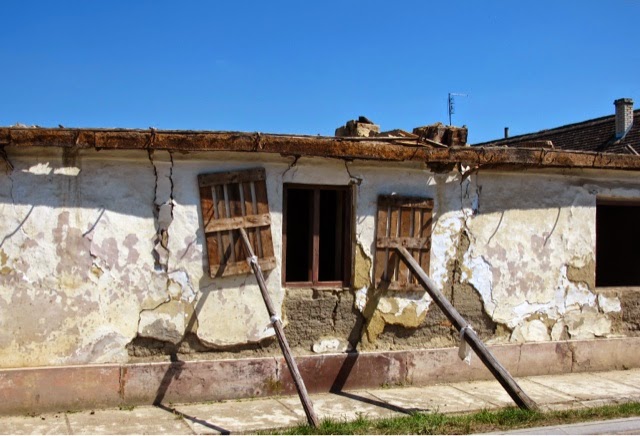 It was a ghost town. Houses were abandoned, windows and doors sagged. There were hardly any people, no children on bicycles or in school groups, not even any cars parked on the overgrown verges on the long road into the "centre" of town. A couple of tiny shops were open, one sold groceries, the other bread.

Across the Danube lay Serbia. Three barges were tied up against the river bank.

We found our way to the edge of the Danube - Serbia lay on the other side - and discovered just one sign of life. Among the empty buildings, a cafe had its sun umbrellas out. A couple sat at one table, a solitary man at another was drinking beer. We wanted to join them, but without an ATM in town we had no Kunas, the Croatian currency, having just crossed the border from Hungary. 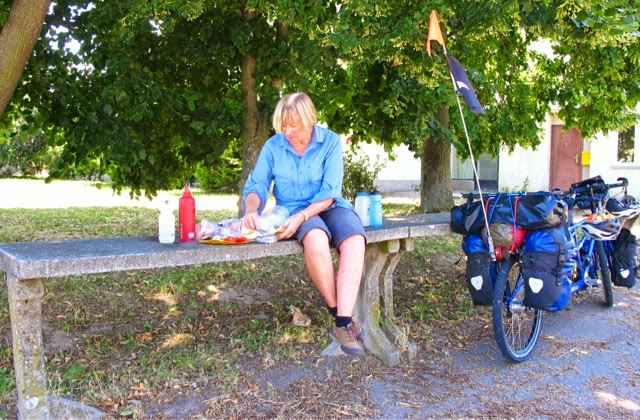 We sat on a concrete table to eat our lunch. A bus without passengers was one of the few signs of life.

We found a concrete table in the shade and pulled our lunch of bread rolls, tomatoes, cucumber and tinned sardines from a pannier. Our water bottles were nearly empty.

The far horizon was obscured by a smoky haze, far away something was burning. 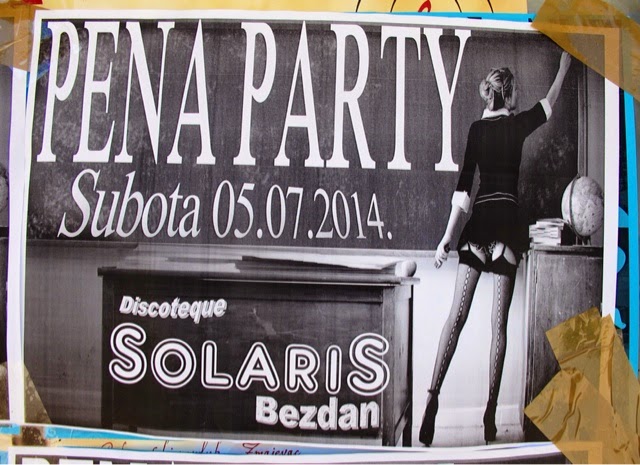 Someone wanted a party, but it was hard to imagine who would have turned up despite the suspenders.

Overheard the sky was a glaring blue and swallows darted and swooped across it chasing insects invisible to the human eye. 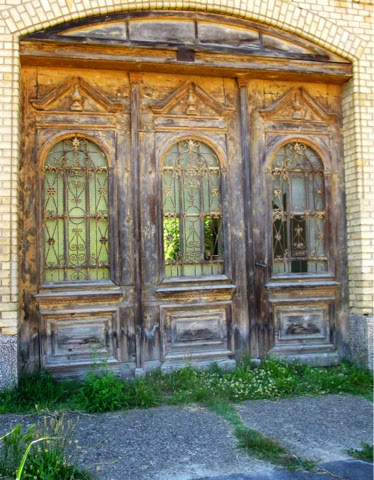 From somewhere, a house, came a raised male voice - was it man and wife arguing, or the rantings of a politician on a too loud television? As quickly as it started, it stopped and we were left with the chirping of the swallows. 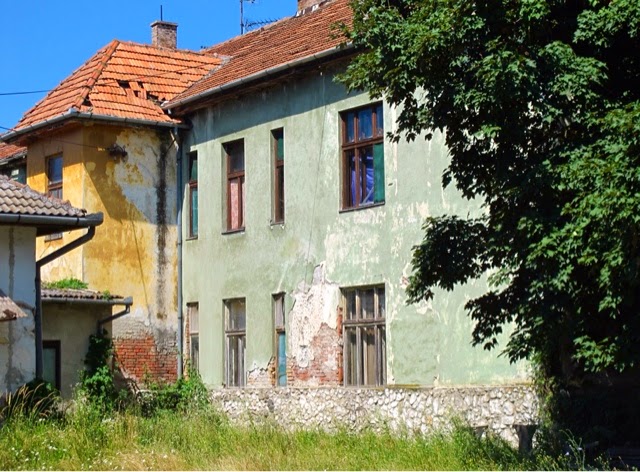 Beside our picnic spot this house lay in decay.

There was a low rumble. "Was that a bomb going off in the distance?"

"No, it was a roller door," said Judy the Stoker. Clearly my imagination was running away with me.

We cycled out the way we came and I looked for signs of fighting, bullet holes and bombed out buildings. They weren't obvious. We chose a route to the next town that avoided the land mines our Eurovelo guide book warned still lay about in wasteland nearly two decades after the civil war of the 90s. 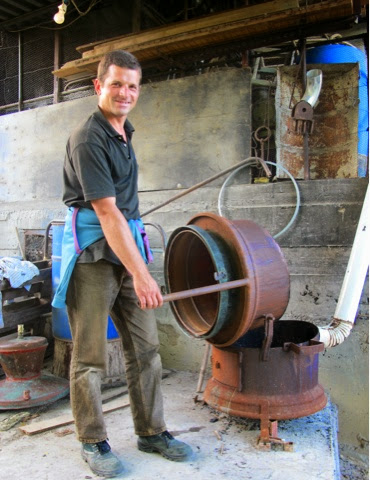 Aleksandar shows off the equipment he and his family use to make wine - including a very passable Reisling. We spent a thoroughly enjoyable night at the "pansion" Bike 2 Bed run by the family in their home at Knezevi Vinogrado, not far from Batina and the borders with Hungary and Serbia. During the Civil War of the 90s Aleksandar and his mother, brother and sister were sent away to Zagreb, where his father thought they would be safer. His father stayed behind and looked after their house. Aleksandar did not see his father for five years.

This evening we quizzed the man at the house where we have a room for the night. "Where are all the people in Batina?"we asked.

He shrugged. "It's the end of the road."

"What about the (civil) war? Did the fighting force them to leave?"

He said,"before the war there were many people. It used to be a tourist town. Now..." And again he shrugged. 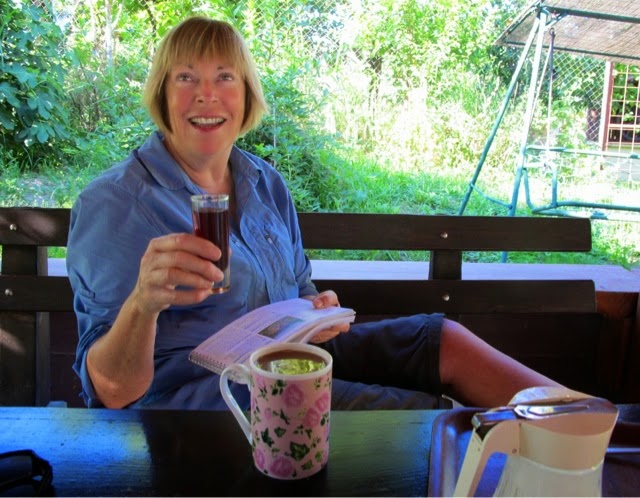 From what we have been able to discover using that well known researchers' tool, Google, Batina had a strategic bridge and during the war tensions were high. The Yugoslav Army had a permanent tank base a few hundred metres from the bridge and at one point UN peacekeepers were stationed nearby to keep the warring factions apart. Whether the fighting overflowed into Batina itself has been difficult to find out, but certainly it was a town threatened by the war - perhaps enough to turn its residents into refugees. 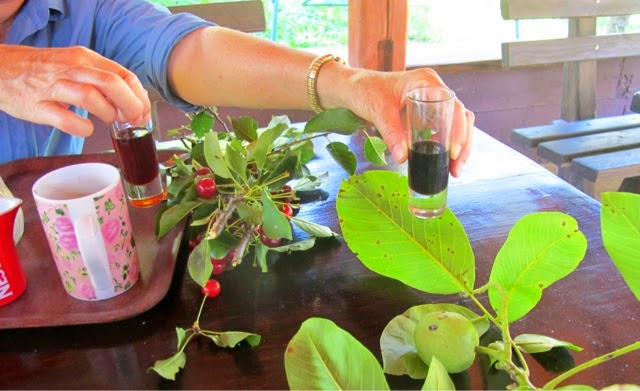 Liqueurs made from sour cherries and walnuts. 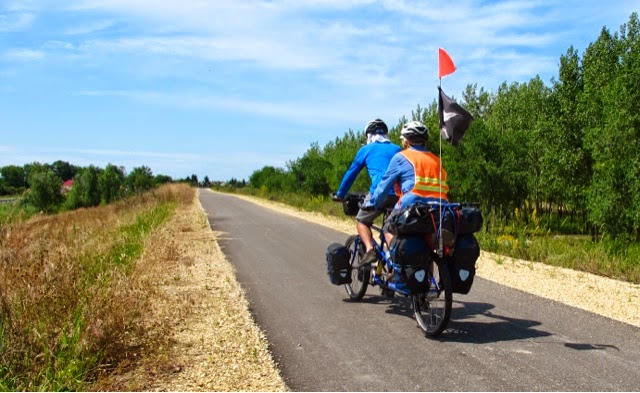 On a bike exclusive path on top of a wall designed to stop the Danube from flooding.

It's with regret we cycled out of Slovakia and now Hungary. The cycling has been perfect, if not challenging. The past few days in Hungary we have been riding for most of the time on bike-exclusive paths, usually sealed and often on top of the dykes that hold back the Danube. 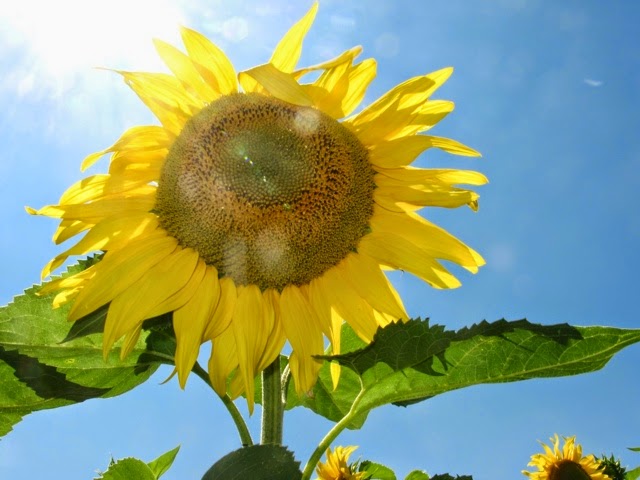 Fields of sunflowers beam at us.

The scenery has been of crops, wheat and maize and sunflowers tilting their heads to follow the sun each day. The occasional thunderstorm has happened at night when we have been curled up in our tent. 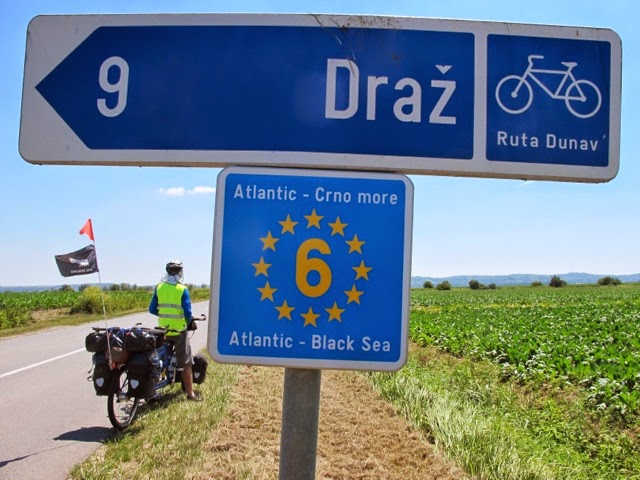 Having crossed into Croatia the EV6 now runs on generally quiet country roads.

Since our arrival in Croatia we have noticed a change. Our route - on the Eurovelo 6 - now runs on roads, fortunately they are quiet with little traffic. But gone are the campgrounds and suddenly we are having to find budget accommodation in "pansions" or in a rented private apartment as we are doing for the next two nights. Suddenly our budget is under severe strain, but our plan is to be in Croatia for only a few days and maybe our costs will reduce when we cross into Serbia. 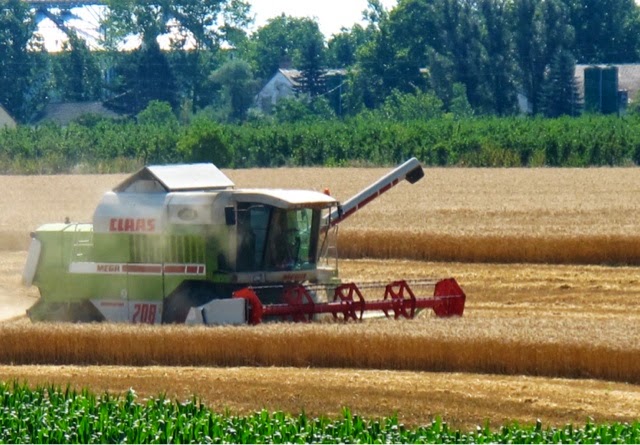 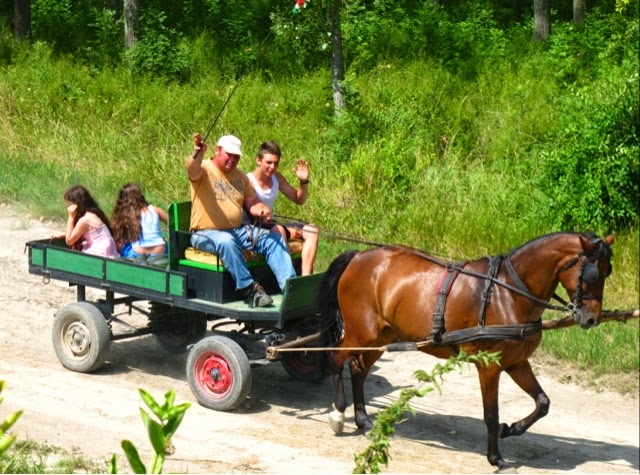 While on the other side of our path, a horse and cart go by.

Tandoids
Current Location: Osijek, the Slavonian capital in Croatia.
Total distance: 17,586 km
This Trip: 1,405 km
Longest Day This Trip: 100 km
Punctures This Trip: 0
Favourite experiences: Drinking fröccs (spritzers - a mix of white or rose wine and soda) near Deak Ferenc, Budapest; free walking tours in Bratislava and Budapest; free concerts in St Martin's Cathedral, Bratislava and in the square in Gyor, Hungary; and the Albertina Art Gallery in Vienna (all those impressionists). 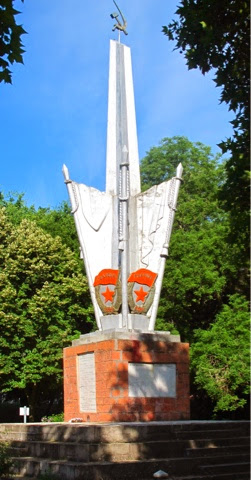 Soviet era memorials still litter the landscape. This one is in a small town in Hungary, where the Soviets are still remembered as the "liberators who forgot to go home." 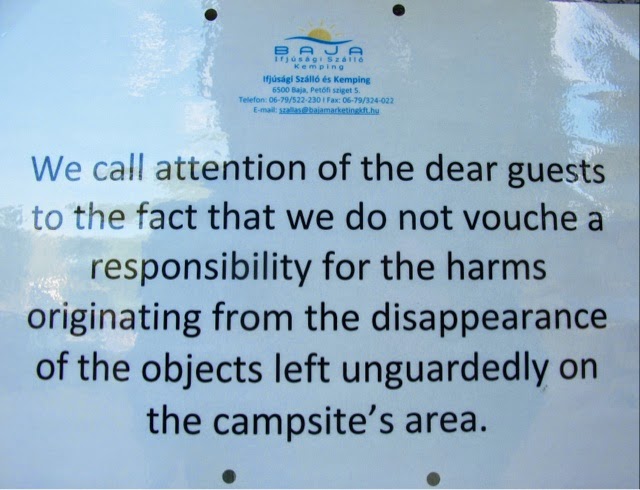 Ok, we get the message. Campground sign in Hungary. 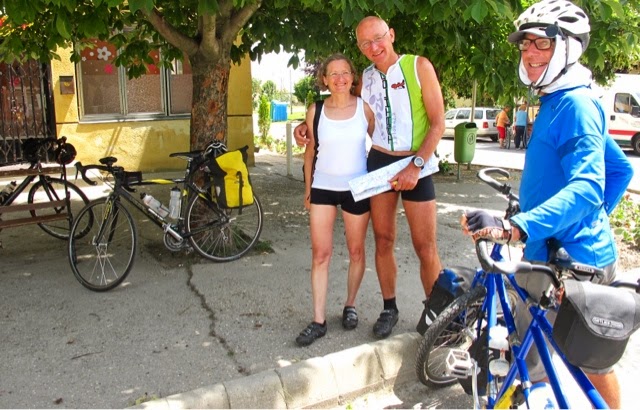 These two German cyclists were making a three week dash from Vienna to Istanbul. We felt exhausted just thinking about what lay ahead of them, but they were cheerful and fast, as we discovered when they swept past us a few minutes later. 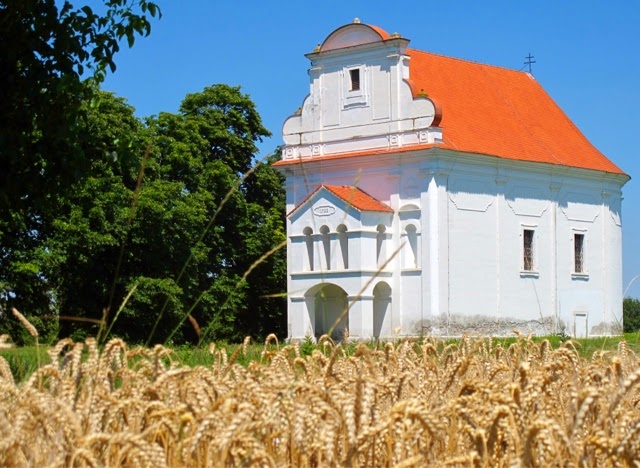 Church without a steeple. Built in 1822, it's called St Peter and Paul Church and lies just inside the Croatian border near Topolje. 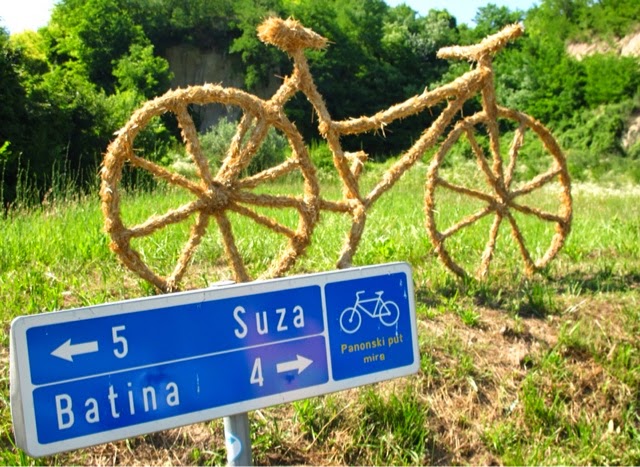 We've been spotting these straw inspired bicycles in fields in Croatia.

Posted by Mike Brockie and Judy Yeoman at 04:24