Rain’s been drumming on the tent fly most of the day, we’ve run out of gas for the stove so can’t have a hot drink let alone a hot meal.  We’ve had to repair seven flat tyres so far – most of them in the last four days – and last night I had to get up at 3 am to chase off a stray dog which had discovered our rubbish bag and strewn the contents all around our campsite.


Cycle touring on the Loire is not all beer and skittles.


To make matters worse, the damn dog evisited our campsite this morning and I half-heartedly threw an empty wine bottle at it. To my amazement, the bottle bounced off her skinny ribcage and she yelped and fled. I felt ashamed. The next time I saw her, she was lying flat on the ground trying to make herself invisible. From 50 metres away, I could see her large eyes following me as if to say, “how could you?”


Above the sound of the rain there is another noise – the Loire as it descends a under the bridge taking traffic into Nevers. The sound is of a waterfall, but from a distance it reminds me of the sea on a wide, wild New Zealand beach – a jumble of breaking water driven by a strong on-shore breeze.

We’ve ventured across the bridge twice since arriving here yesterday – it has a well-marked cycleway – once to buy food and today to find hot coffee. The trip back yesterday was enough to deflate the rear tyre once again as we bounced over the cobblestones. We’ve had enough of these tyres, and tomorrow we begin the hunt for two new ones capable of handling the rough roads and the load we are carrying on the tandem. We won’t leave town without them. 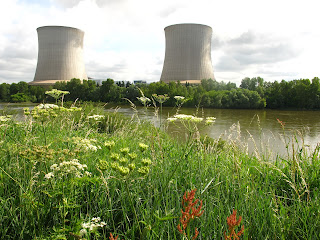 Despite the above, we remain content. We’ve spent much of the day resting in the tent, eating bread and pate and ham and fresh fruit and yoghurt and oh yes, drinking a nice little Cotes du Rhone. 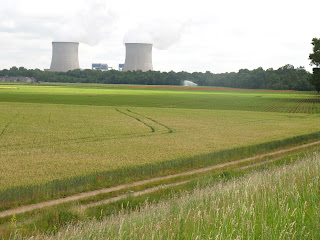 We’ve caught up on some of our emails, talked about the route ahead and planned what we would like to do tomorrow.


And now it’s stopped raining. There’s no sign of the dog, we’ve discovered the campground café sells coffee from an early hour and we know that if the worst comes to the worst we can always buy the tyres we want over the internet.


Life could be far worse.

Whilst minding our bike outside a big supermarket in Bonny-sur-Loire, while Mike shopped, I became mesmerised by the agility and dexterity of the elderly French women whipping into the parking area on their bicycles, reaching down to lock them at ground level and strolling off to do their shopping.


They wore skirts but no helmets, they were late 70s and early 80s and had vim and vigour. Fabulous! I aspire to that physical competence at their age, should I be so lucky.


We cycled up a rise and suddenly we were crossing high above the Loire on the most wonderful canal bridge. Carrying water for boats to cross – and one did as we watched – a stunning structure and sight at the lovely village of Briare. We are now in “canal country” but crossing our second “Pont Canal” equally as impressive near Nevers, was again a real treat.
﻿﻿﻿
﻿

Posted by Mike Brockie and Judy Yeoman at 05:40