You can smell the rain in the air, fresh and sharp and cleansing. For hours, thunder has been growling out of the north east, then all around us, growing closer and closer but still no deluge.

When the deluge arrives, it will fall on modern day pilgrims – not of the religious kind, but pleasure seeking 21st century cyclists all making their own personal journeys along the Loire, one of Europe’s great waterways.


Already we feel we are participants on that journey, adding to the current folklore. This morning we were addressed by one of two aging cyclists as we paused at a rest spot at Chalonnes-sur-Loire,”Hello, you are from New Zealand, you were at St Malo and you are on your way to Constanta" (actually, we have Istanbul in mind).


When we looked surprised that a total stranger knew so much about us, he said he’d been told to look out for the Kiwis on a tandem by some friends of his – ten of them – that we’d met along the way. The fact that we couldn’t recall this group of ten says something about the volume of cyclists on the Loire, and the number of encounters we are having.


A little later – when we stopped for coffee – another French cyclist, a young man this time, addressed us. “You had a bad night – lots of mosquitoes at your campsite.” Word travels fast on the Loire.


As for our own pilgrimage, it is everything we expected only better.  The rain and cold and fields of crops and cows of Brittany have given way to sunshine and grape vines, row after row, and quaint villages that seem permanently asleep. Wild flowers burst from stone walls and carefully cultivated roses, lavender and rosemary are in every garden. Everywhere is the Loire - from cycle path panorama to snatched glimpse from a village square.
And just when we think we’ll never find our morning café crème, a tiny café/bar/restaurant comes into view and we sit outside in the sun. Afterwards, we leave the bike where it is, safe in the knowledge that no-one is going to rifle through our panniers while we visit a mediaeval church a few paces away – this morning’s example in Savennieres was cool and dark and had a quietening effect on us and a small group who entered with us. 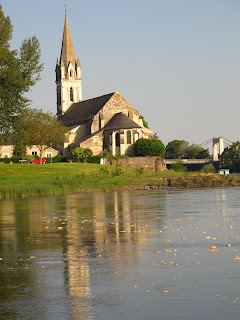 If it all sounds idyllic, it is – except for one thing: navigation. It is primarily Judy’s task as I seem to have my hands full simply keeping El Beastie on the road. But her view from the Stoker’s (rear) seat is partially obstructed by my back and sometimes directions come too late for me to act. We have a communication breakdown. It is something familiar to most couples travelling by car in unfamiliar territory, and it is something we figure that together we can improve. 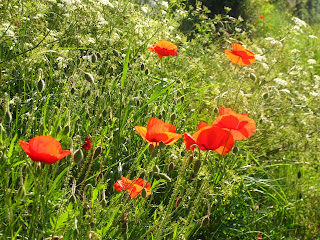 Right now though, we are snug inside our tent and that thunder is still rumbling. Rain on a corrugated iron roof touches some primal instinct –shelter from the storm. It sounds even better in a tent, and we are waiting expectantly.
Post script: Apart from a couple of showers overnight, the rain never arrived.
Judy the Stoker says … the cycling near the Loire is so different compared to moving along the small roads of Dorset and Brittany. So much is set up for cyclists here - tiny paths a couple of metres wide with stone houses built on the verge, turnstiles providing access to cyclists and walkers only, cobblepath paths. The route is so well marked, directing us through small villages and occasional, quiet back roads along the Loire.
Whilst we can pick up speed in places, mostly it is an obligatry amble, stopping often to see the sights. 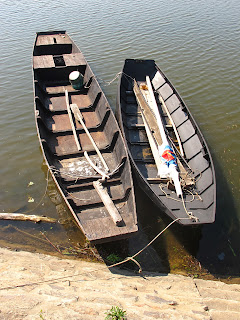 The many spanned old stone bridge and new quay area at la Possonniere, the church at Savennieres, a Mediterranean garden set beside the Loire - but most of all the stunning roses growing igh over the rock wall fences in the villages, old rambling roses dripping from hedges along the tiny roads and other, colourful flowers lining the route. We've slowed down to a potter.

I have been disconbobulated  though by shearing off a quarter of my molar crown and now am hunting a dentist!


Posted by Mike Brockie and Judy Yeoman at 22:36